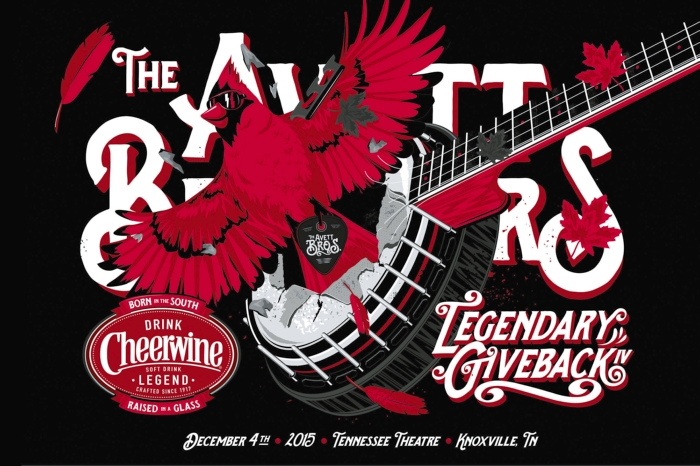 As the holidays approach, Cheerwine and The Avett Brothers are celebrating the people who take the time to give back to others and awarding one philanthropic person with an all-expense-paid trip to “Legendary Giveback IV.”

For the past three years, Cheerwine and The Avett Brothers have hosted a “Legendary Giveback” concert where proceeds go to nonprofits that support families and children. Nearly $200,000 has been raised to date.

This year’s “Legendary Giveback IV” will be held Dec. 4 in Knoxville, Tenn., and will live stream across the country.

From now until Friday, people across the country can join in the “giveback movement” by going to www.cheerwinegiveback.com and sharing a video or photo of their kindness in action for the chance to win an all-expense-paid trip to the “Legendary Giveback IV,” and a backstage meet and greet with The Avett Brothers.

A press release from Cheerwine said the company “is honored to be the soft drink of choice for authentic, passionate and giving individuals.”

With entries to date ranging from ecosystem conservation and protecting the dolphins to a photographer using her talents to assist in the finding of donor organs, Cheerwine’s promotion celebrates selfless individuals devoted to sharing kindness and making the world a better place.

“We’re proud to be a catalyst for spreading cheer, along with The Avett Brothers,” said Tom Barbitta, senior vice president of marketing for Cheerwine. “We believe in authentic expressions of generosity, and that’s exactly what ‘Capture the Kindness’ represents.”

For information and to enter Cheerwine’s “Capture the Kindness” movement, visit www.cheerwinegiveback.com.

Formed in 2001 in Charlotte, The Avett Brothers are comprised of brothers Scott Avett on banjo and Seth Avett on guitar, along with stand-up bass player Bob Crawford and cellist Joe Kwon. Described as a rootsy amalgam of folk, country, bluegrass, rock and pop — with a jab of punk-style dynamics here and there – the band has released eight studio albums and several EPs, earning critical acclaim, a Grammy nomination and Rolling Stone’s 2009 Artist to Watch.

Launched in 1917 by L.D. Peeler, Cheerwine is owned and distributed by the Carolina Beverage Corp. and Cheerwine Bottling Co. in Salisbury. The company is still privately owned and managed by the same founding family, five generations of whom have worked there. Cliff Ritchie leads Cheerwine as president and chief executive officer.