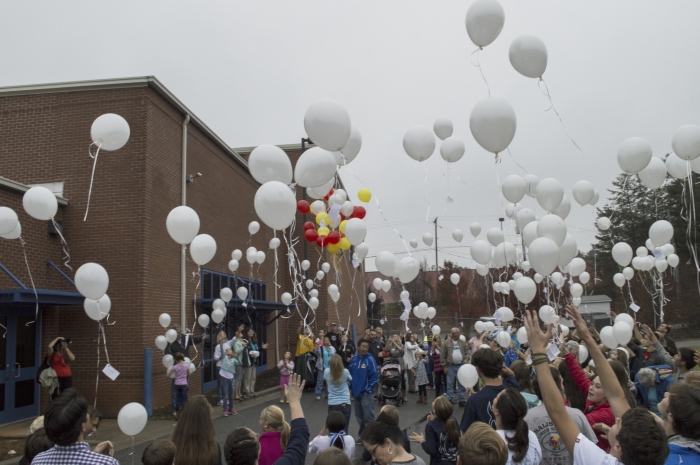 Lori Yang struggled to hold back tears Sunday as she recounted the 14-year history of Voices of Hope, which started shortly after the death of her son Michael Yang in 2001.

“Our children that have gone on before us continue to make beautiful things out of us,” Yang said. “They had and still have a purpose.”

She gave a special tribute to the dozen or so high school seniors, who have continually helped make Voices of Hope possible. The high school seniors were only children — her oldest sons John and Alex were three — when Michael died in 2001. Now, 14 years later, they’re preparing to head off to college.

Lori’s emotional tribute ended with a song and slideshow of the event’s 14 years. Lori and the large crowd of people then exited the YMCA to release more than 300 balloons into overcast skies.

Lori encouraged the crowd to think of a lost loved one when releasing the balloons.

“We can take the pain in our hearts and turn it into good,” she said near the end of the event.

The hundreds of white balloons slowly drifted into the sky after being released. A few red and yellow balloons dotted the field of white. One by one, they disappeared into the clouds above.

Lori said losing a loved one is difficult. As a parent, however, losing a child “is one of the darkest places you can go.”

“It’s a nightmare, and something you don’t really want to talk about,” she said earlier in the event. “But, this is a day when it’s OK to talk about it.”

Sunday’s event, and the 13 before it, raised money for the Michael Yang Foundation. Lori and her husband Steve started the foundation shortly after Michael’s death. Money raised by the foundation supports Circle of Hope, which provides free counseling for grieving parents.

The group meets at 7 p.m. on the second Thursday of every month at Steve’s dental practice — 2290 Statesville Blvd. The group also has a dinner at 7 p.m. on every fourth Thursday at Ryan’s — 730 Jake Alexander Blvd.

Lori and Steve said a number of individuals, including the high school seniors, have been critical in making the fundraisers and Circle of Hope possible.

Lori said the counseling gives grieving parents a place to go in difficult times. Parents may not want to discuss deaths right away. The counseling, however, is always available, Lori said.

As a measure of the number of people now involved in Circle of Hope, Lori said she has a mailing list of about 200 people.

This year’s Voices of Hope Event was held at the JF Hurley YMCA because of rainy weather. It’s typically held at Spencer’s Library Park. The event involved a long lineup of singing groups and individuals. Food and games for children were also available.

For more information about Voices of Hope, Circle of Hope or the Michael Yang Foundation, visit: www.michaelyangfound.org.