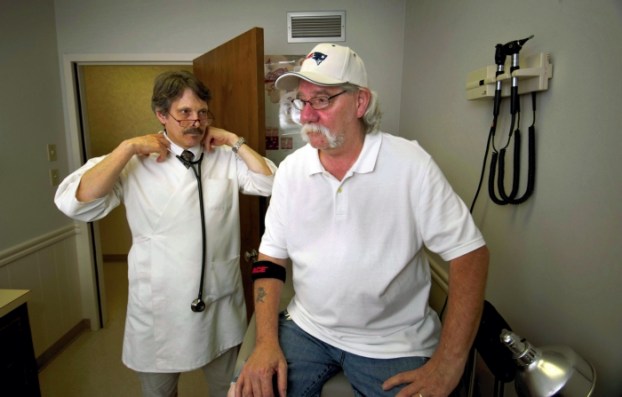 JON C. LAKEY / SALISBURY POST Dr. Joe Oliver is carrying on the family tradition of doctoring the medical ills of the people of Rockwell at his office on US 52. Oliver talks with one of his long time patients Walt Hutchinson. Oliver can afford to spend more time with his patients then most other doctors can. Thursday, October 8, 2015, in Rockwell, N.C.

ROCKWELL — For generations, there’s been an Oliver practicing medicine in Rockwell. Now, Dr. Joe Oliver is trying something new.

As of Oct. 1, Oliver is no longer accepting insurance. Instead, he’s invited his patients to enroll in a direct primary care plan. The plan is similar to that of concierge medicine, but at a lower cost.

Oliver says the direct primary care plan is more similar to a Y membership. Patients pay $49 a month or $59 a month if they are over age 65, then $20 per visit. These fees take care of all basic services and tests Oliver provides.

In a letter he sent his patients this summer, Oliver explains, “This allows me to practice medicine with one goal is mind, your best health.”

Faced with decreasing payments by insurance companies, and bothered that he didn’t have enough time to spend with patients, Oliver began looking into direct primary care about two year ago, he says. He found a doctor in Apex who offered this model of care.

Concierge medicine, Oliver says, is for the “rich and famous. They pay a bunch of money a month, and you’re at their beck and call. This is not that at all.”

Oliver says he does not want to be told how to practice medicine by the insurance companies. Instead, he wants to spend as much time with a patient as he or she needs.

Given just 10 minutes, he says, “I wouldn’t be taking good care of my patients.”

This model allows that, he says. “It allows me time to address issues instead of doing it piecemeal. This practice model fits my style of practice preference.”

Oliver says when his membership is full, he’ll be seeing about 10 patients a day. Patients can pay by the month or the year. If you pay for a year’s membership, you get a price break.

Thus far, about 10 to 15 percent of Oliver’s patients have signed up for the program. He expects to reach 35 percent — his goal — in about a month.

“They are beautiful machines, but they take a lot of TLC and maintenance in order to keep them running well,” he notes.

Oliver believes that direct primary care “is a way to provide primary care at a reasonable fee. It’s affordable. If people have a large deductible with their insurance, they can use this plan and have less out-of-pocket expenses.”

It’s also a good alternative for the uninsured or underinsured, and is accepted by Affordable Health Care.

Oliver says most of his patients have been receptive to the new idea. “Part of why they come in is that I do spend time with them, and the plan sounds reasonable.”

Walt Hutchinson is a longtime patient of Oliver’s who has signed up for the plan.

“I’ve been his patient for so long,” Hutchinson says. “It sounds like it’s gonna cover what Medicare doesn’t. Dr. Oliver is really great. He’s helped me a lot.”

Hutchinson says he was afraid to take medicine at one point, but that Oliver has helped him lower his blood pressure and his anxiety level.

“Before, I was like a cat on a hot tin roof,” he says. “I don’t want to go anywhere else because of the personal care I get with him.”

Editor’s note: Efforts to reach Sondra Merrifield were unsuccessful before the publication of the Rockwell election story in Monday’s Post. She contacted... read more