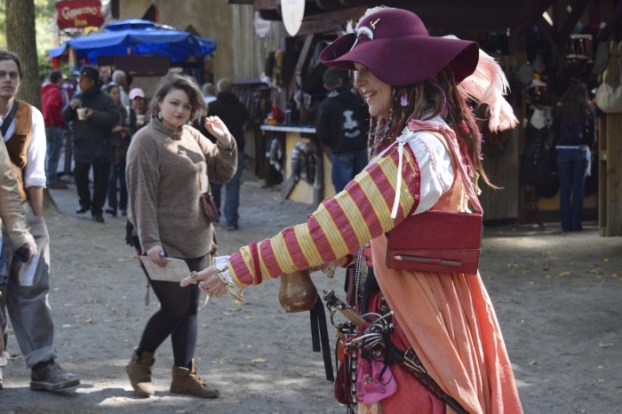 Kathleen Tronsor refers to herself as an anti-pirate. When she walks the streets of Fairhaven at the Carolina Renaissance Festival, she’s dressed, head to foot, in pink.

Tronsor, of Salisbury, is one of the Festival’s cast members. She strolls around the Festival tipping her hat to passersby, asking fellow seafarers to register their ships, and approaching anyone wearing pink. During the week, Tronsor is the Corporate IT Systems Manager at Carolina Color, but come Saturdays in autumn, she transforms herself into Petunia the Pink Pirate, and helps immerse guests in the magic and fantasy of the Renaissance Festival.

“As an actor, this is just such good training,” Tronsor explained.

Working on cast at the Renaissance Festival means that actors can sharpen their skills for eight hours a day, every weekend, for two months. They work largely with improvisation, acting with the public.

Tronsor was a struggling stage actor when she joined her first Renaissance Fair in Dallas/Fort Worth, Texas in 1993. After her first season on cast, she got her big break.

“As an actor I use to be kind of nervous and kind of stagefrighty” she said, “ . . . it burned the fear right out of me. Now I’ll do anything.”

Auditions to be on cast with the Carolina Renaissance Festival are held at the beginning of summer. Hopeful citizens of Fairhaven audition with a skit, an act, or a skill, and are accepted or declined. First-year performer Gina Carli, 26, says she did step-dancing and clowning at her audition this summer.

Carli, a native of Salisbury and a teacher of dance and theater at Lake Norman Performing Arts, just moved back to the area after receiving her master’s in fine arts from the University of California, Irvine.

She auditioned at the request of a cousin, and wasn’t sure what to expect. But as the season’s progressed, she’s loved bringing guests the feel of the fictional Tudor Era village of Fairhaven and says she’s fallen in love, all over again, with improv.

“It’s where I’m most comfortable in my skin,” she said.

Darrell Brown, 56, of Spencer, has been on cast with the Carolina Renaissance Festival for 12 years, but says he prefers to fade into the background a bit. The 56-year-old Spencer native works as an X-ray tech at Novant Health Rowan Medical Center and has also been heavily involved in Piedmont Players Theater, but says he likes the freedom to drop one-liners at the Festival and move on.

Brown joined cast in 2003 as a hawker-crier for a stage act. Now, he’s the manager in charge of eight of the festival’s 12 stages, in addition to being the festival’s official cannoneer and playing guitar with the Hidden Harbor Mynstrals.

Part of being on cast is developing a character to slip into on Saturday mornings. Tronsor says she stumbled into the character of a fearsome, pink pirate almost by accident. When she joined the Carolina Renaissance Festival in 2002, Tronsor says, she switched out her character every year. In 2005, Tronsor made a splash with Petunia the Pink Pirate and knew she could have a lot of fun with the character each year.

“I actually hate pirates,” she confessed.

Tronsor says that most people who are fond of pirates know very little about them. Historically, they were little more than violent thugs. So, she decided to show them wrong.

“I would be the antithesis of what people thought about pirates,” she said.

She would be pink. And she would be the most vicious pirate anyone had ever seen.

The Renaissance Festival hosts workshops every Saturday in August and September to help veterans and greenhorns alike strengthen their Renaissance personas.

Carli attended the workshops and, together with her two teammates Catawba student Cierra McDonald and Haven Shea, crafted a troupe of aspiring Commedia dell’arte performers. Commedia is a form of Italian Renaissance theater where actors wear masks to indicate a particular stock character. It made famous characters like Harlequin and Pierrot.

The three of them travel the streets of Fairhaven as young performers, and morph into their Commedia characters as soon as they don the masks.

“The workshops are very supportive,” Carli said, “They allow you to explore and grow and play.”

Tronsor says the workshops are used for everything from studying the history of the times — for the Carolina Renaissance Festival that’s roughly Tudor and Elizabethan England — to practicing a multitude of accents. According to Brown, he’s practiced his accent in workshops enough to fool several UK natives.

Tronsor says that she’s learned all about ships and sailing, and even knows how to navigate using a sexton. You’d never know talking to Petunia, but Tronsor says it informs the character.

“The better you base your character in reality, the more you have to play with,” she said.

But members of the cast agree that it’s all about the people. Tronsor says she loves to see people go to the Festival in costume, whether it be traditional Renaissance garb or . . . a group of Klingons.

“People take the fantasy aspect of the fair and just run with it,” she said, laughing.

She feels that when people dress up — be it as a time traveler or a baker — they’re signaling to the cast that they’re ready to fully immerse themselves in the fantasy of the Festival, and many of them are willing to dive headfirst into the improv game.

“That to me is the spirit of the Renaissance Fair,” she said.

Carli says that the cast is hugely supportive of each other, and welcoming to newcomers, stage acts, and anyone who works the Festival.

“The whole cast is a huge family, there to support each other,” she said.

Brown says that he’s gotten to know several of the stage acts in addition to the cast members. He goes for jam sessions or gatherings after the gates close, and looks forward to seeing familiar faces each time fall rolls around.

“You make friends, and it’s kind of like a family reunion every year,” he said.

And the other reason? It’s just fun. Everyone goes to the Renaissance Festival to have fun, Tronsor says — including the cast. Brown is also a civil war re-enactor, and says that there’s a large re-enactment in South Carolina that he misses every fall because he’d rather be strumming a guitar in Fairhaven. He works with the public all week at his day job, and the Renaissance Festival allows him to cut loose.