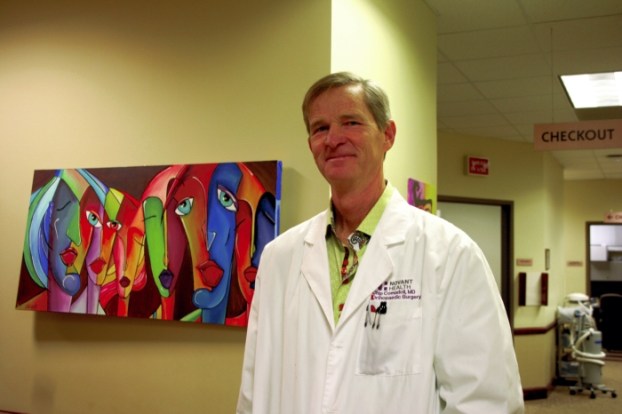 Dr. Chip Comadoll has been painting for the past five years. He is an orthopedic surgeon at Pinnacle Orthopedics. Photo by Susan Shinn, for the Salisbury Post.

Chip Comadoll fancies himself a cowboy. He’s got the swagger and he’s got the cool tools. And he’s got the boots, which he likes to show off by slinging a leg up on his conference table, as he is wont to do in casual conversation.

But Comadoll is in reality an orthopedic surgeon. For the past five years, he’s also been an artist. But his artwork is way different than those staid pieces you’ll find in most doctors’ offices in the area.

Bright colors. Abstract faces. Lots of eyes and lips. It’s no wonder he’s a huge fan of the Rolling Stones, and has painted likenesses of Mick Jagger and Keith Richards.

Comadoll took up the hobby five years ago, when he turned 50. He loved watching Bob Ross, the artist on PBS, or “the dude with the hair,” as Comadoll calls him. “I thought he was so damn cool. My wife bought me one of his paint sets, and I just started painting.”

He needed to concentrate on something else other than his work, which consumes an awful lot of his time.

Comadoll’s work has a definite edge to it, he admits. He counts Picasso among his influences.

“That’s how I see it when I paint it,” he says of his cubism-inspired pieces that are “nowhere close to realism.”

He’s always been a fan of Andy Warhol — thus the bright, almost Day-Glo colors in his work.

Has he ever thought about taking lessons?

“Pffft — never,” he says dismissively. “We’ve gone to a lot of museums.”

He just paints what he likes, and what wife Kari likes — and what she likes is bright colors.

Comadoll calls his wife “the best thing in the world.” The couple has three children: daughter Shea, a student at Wake Forest School of Medicine, and sons Lucas and Clint, both students at Appalachian State University.

All of them have many of Comadoll’s canvases. When his wife’s purse got stolen, he painted “Purse Snatcher.”

“I can go dark,” he says of the mood of some of his paintings.

On the other hand, a painting he did of his daughter is bright and carefree.

Comadoll paints in a corner of his sunroom. He typically works on several paintings at once, and paints in the evenings instead of watching television.

“I read so much in my profession that I’m not a huge recreational reader,” he notes.

He’s given paintings to his family, his partners, his staff, even some patients. All of his partners are men, and Comadoll points out that because of the physical nature of the job, only 10 to 15 percent of orthopedic surgeons are women.

“We’re all cowboys,” he says. “We have the coolest tools.”

Comadoll also dabbles in pottery but, unlike his wife and children, has no musical ability whatsoever. Lucas is a guitarist and Clint is a drummer. All three children took piano lessons.

He likes the fact that the paintings have found a home in his office.

“Your office needs to be an extension of your personality,” he says. “Most of my patients think these paintings are the coolest things since sliced bread.”

“We’ve heard it all,” says Evelyn Cates, his nurse.