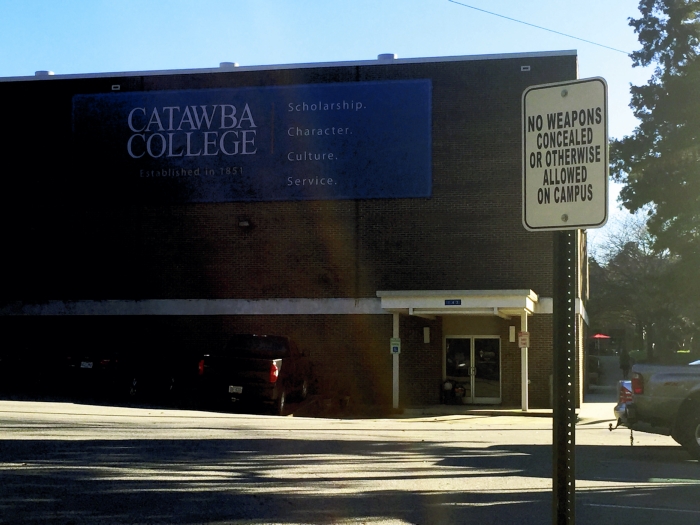 Amanda Raymond/Salisbury Post There have been over 20 instances of violence on college campuses this year. At Catawba College, and many colleges across the country, there are emergency prevention and response procedures in place to help ensure campus safety.

Years ago, Catawba College held a phone-a-thon fundraiser. A student participant called an alumnus during the event to ask if he or she would be willing to donate money.

The alumnus was not too happy about the call. The alumnus was verbally abusive over the phone towards the student, enough to spring the college’s Threat Assessment Team into action.

The team investigated the situation to ensure there was no threat to the student who made the call.

“You wouldn’t have thought stuff like that could happen,” Dr. Nan Zimmerman, a counselor at Catawba College said while recalling the incident.

There is no guarantee of safety on college campuses, especially since shootings are unfortunately a reality. But campuses have and are ramping up their safety procedures to try and make campuses as safe as they can be, from protecting the campus from outside threats to investigating possible internal ones.

The shot heard round the world

Nationally, shootings in schools have unfortunately become more frequent. This year, a shooting at Umpqua Community College in Oregon left 10 dead, including the shooter, and several injured.

As far as college campus shootings go, the shooting at Virginia Polytechnic Institute and State University, also known as Virginia Tech, in 2007 was the deadliest shooting rampage in American history. Student Seung Hui Cho killed 32 people before killing himself.

Though there have been instances of violence on the campuses in the Salisbury area, none of them had the features that gained the Virginia Tech shooting national attention.

Zimmerman said the shooting at Virginia Tech was the spark for the college ramping up its emergency responses.

“Virginia Tech was sort of the catalyst that said, ‘Go back, check your policies,’ ” she said.

Zimmerman said after Virginia Tech, the government sent out a report with recommendations for maintaining safety on campuses.

“All the colleges, if they were smart, got these reports and started reading and comparing what they were doing, and we were all lacking,” Zimmerman said.

Catawba actually had an active shooter drill a couple years ago. The college coordinated with police, the local hospital and other emergency services to go through all the steps that would need to occur if there was a shooter on campus.

Catawba, like most other colleges, has programs in place like CatawbAlerts, which send participants messages when there are emergency situations on campus, from hurricanes to lockdowns. Catawba also has CatWatch, a website where students can anonymously report suspicious persons and activities.

College campuses also have detailed lockdown procedures to ensure safety during a threat, as showcased at Rowan-Cabarrus Community College on Friday when the campus was put on a precautionary lockdown after shots were heard in the woods off campus.

Rowan-Cabarrus has information posted on their website about what to do in cases of emergencies, and also communicate that information to faculty and staff.

“Things like, if you do call 911, what kind of information should you prepare to be giving them,” Paula Dibley, director of college relations, marketing and communication, said.

In 2011, Dibley said Rowan-Cabarrus reinvigorated their campus safety procedures, bringing in a full-time director of safety and security and providing safety trainings for faculty and staff.

Although Zimmerman said most of the threats that the college faces are not from inside the school, they still watch the actions of individuals on their campus.

Zimmerman is the co-chairwoman of Catawba’s Threat Assessment Team. According to the team’s website, it monitors individuals on campus and determines if anyone poses or may pose a threat to themselves, others or the college community. The team then intervenes to help end the threat and maintain campus safety.

“From the disgruntled spouse or spousal conflict, (Zimmerman) might hear about that, to someone whose parents might have called and said, ‘Hey, my kid is posting suicidal things on Facebook,” Tonia Black-Gold, chairwoman of Catawba’s emergency response group, said.

At Rowan-Cabarrus, there are trained and licensed mental health professionals to help students, something that is not available at all community colleges.

“We go into the classrooms and have an overview presentation that we do regularly to talk about all the resources and services that are available to students for free,” Misty Moler, director of counseling and career services, said.

The mental health side

Many mass shooting that gain national attention have people wondering if mental illness played a part in the act. Though sometimes it may, Zimmerman said most people with a mental illness are not violent.

“It’s never truly the mentally ill. It is this undiagnosed category of the disgruntled, the angry, the socially isolated, oftentimes might have had something like depression or anxiety that went untreated or treated ineffectively,” Zimmerman said.

Moler said that rather than being based on a specific mental illness, violent acts like school shootings are based on the irrational belief that the act will make up for the wrongs or obstacles the person has experienced.

Zimmerman said over half of the people who receive campus counseling are not mentally ill, but rather students dealing with relationship issues, family problems and everyday stresses.

To help students with deal with the daily stresses of college, Catawba has free counseling and events like Stress Fest where students participate in stress relieving activities.

Moler said the best thing individuals can do to help relieve stress is put themselves first.

“I think it’s important for people to connect with things they enjoy doing and making sure that those things are in their life,” she said.

When it comes to warning signs for someone who might be a threat to themselves or others, both Zimmerman and Moler suggest looking for signs of social isolation, poor hygiene, substance abuse, slipping grades, a meltdown, suicidal or threatening speech and risk-taking.

“It’s basically something that is out of character for that person that you know. They’re doing something that they normally don’t do,” Zimmerman said.

No place can be perfectly safe, but college officials are doing all that they can to keep campuses safe.

“I feel that Catawba is in a good place. We’re not in a perfect place for safety, or else we would have disbanded both of our teams and our committees,” Black-Gold said. “But we have made such great strides.”

Everything but the kitchen sink: kitchen supply store stocks…