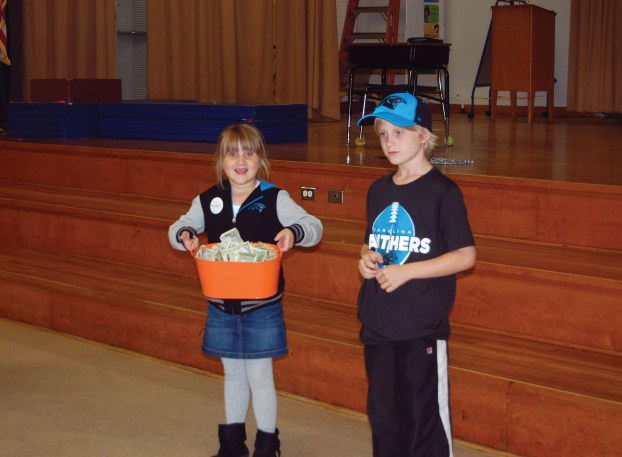 Amanda Raymond/Salisbury Post Josie Fesperman (left), a former Make-A-Wish participant, helped her school raise moeny for the foundation. Josie was born with a immune deficiency, and her brother Warren (right) donated bone marrow for a transplant she needed.

Overton donates over $200 to Make-A-Wish

For a school that requires uniforms, paying a dollar to wear casual clothes seems like a dream come true. But instead of thinking of themselves, students at Overton were encouraged to use their casual Friday to make another child’s wish come true.

Students from Overton Elementary School used one of their causal Friday fundraisers to donate money to the Make-A-Wish Foundation.

The students raised over $200.

The students were allowed to wear casual clothing instead of uniforms on Friday if they donated one dollar to the cause.

“Every month or so we have a casual Friday where we bring in a dollar and we donate that to a cause. This is one of the first times that we’ve been able to have someone come out to talk to us about those causes,” Principal GeRita Walden said to the students.

The Make-A-Wish Foundation works to grant wishes of children diagnosed with life-threatening medical conditions. According to their website, one wish is fulfilled every 37 minutes.

Last week, the foundation and the Walt Disney Company celebrated the 100,000th Disney-related wish, according to a recent press release.

Fran Lescoe is the student support specialist for Communities in Schools for Overton. She heard that Josie Fesperman, a former Make-A-Wish child and first grade student at Overton, had been interviewed by a Charlotte WISH society member and decided to invite the member to speak to the students.

Lescoe said inviting the member to speak and accept the money was good for the students to see.

“I thought it would be more meaningful … to our children at the school to see exactly where the money is going and what it’s for,” she said.

Josie Fesperman was born with a severe combined immune deficiency, a disease in which the specialized white blood cells that protect the body from the infections of viruses, bacteria and fungi are defective, according to the National Center for Biotechnology Information website.

“We went for almost the first four years of Josie’s life where the thoughts of her being in a room with this many kids, or with really two or three other kids, made us extremely uncomfortable because of her illness,” Alan Fesperman, Josie’s father, said.

After a bone marrow transplant from her older brother Warren when Josie was almost three years old, her doctors gave her name to the Make-A-Wish Foundation.

Josie and her family were able to go to Disney World, where Josie met Ariel from the Little Mermaid. Alan Fesperman said it was more like a celebration trip for their family.

“We never really got to go on a trip before because of her illness,” Melissa Fesperman, Josie’s mother, said. “It was amazing.”

About a year ago, the Fespermans partnered with Make-A-Wish to become an ambassador family. They were then partnered with the WISH member to help raise money for the foundation.

“Not every child is as lucky as (Josie) is,” Melissa Fesperman said. “This is something to help them feel normal and have fun. I’m glad that (the students) are getting that experience and being generous.”

Alan Fesperman said he was grateful for what the Make-A-Wish Foundation did for his family and other families.

“I’m speechless when I go to talk about how incredible they are,” Alan Fesperman said.

The WISH ambassador talked to the students about the organization and the money they raise for Make-A-Wish, and Alan Fesperman told the kids about Josie’s experience.

The WISH — Women Inspiring Strength and Hope — society works with Make-A-Wish to raise money to grant the wishes of sick children.

Josie was not the only Make-A-Wish recipient in the gym. Kyarra Mcclellan, another student, was allowed to meet singer Ariana Grande backstage. And teacher Simone Anderson, who was diagnosed with Hodgkin’s lymphoma when she was 12, got to go on a cruise.

Walden thanked the children for their donations and urged them to think of casual Fridays as something to help others.

“I don’t want you to just think of this as a day where you get to wear clothes that you want to wear,” Walden said. “I want you to know that what you’re doing is making a difference in the lives of a family or other children.”