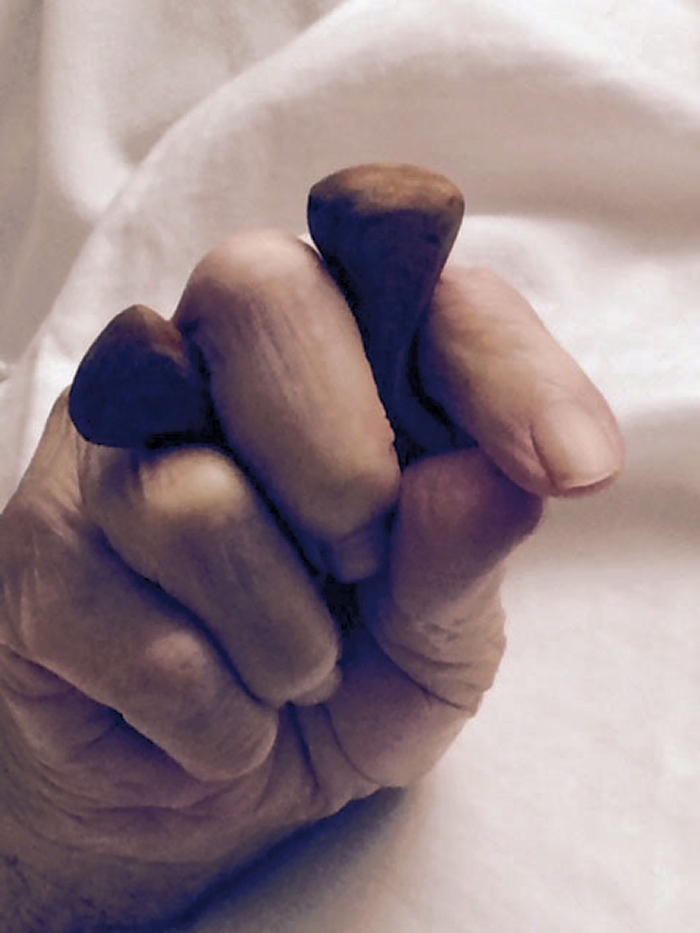 While serving at Village Presbyterian Church in Kansas City, a Stephen Minister called to say his care receiver was in a crisis moment. He was afraid of his impending death. I went by the care receiver’s house and it did not take long for him to bring up his crippling fear.

I asked if he had a cross. We talked about the visible symbol the cross can be, showing us Christ’s presence and God’s power to free us even from fear. He was going to ask his wife if they had one. I went by a week later and he showed me 2 crosses, one for the den where he spent most of his day, and one for his bedroom. He told me his wife could NOT find a cross in their house, so his Stephen Minister went out into his yard and found 4 sticks. And then made them into wonderful crosses.

A year later the care receiver was in the hospital and I went by to see him. As he talked he brought up his fear of dying. I said, “Do you remember the cross?” The man pointed to his bedside table, to one of the crosses his Stephen Minister had made. The man said, “There it is, I’m keeping it as close to me as I possibly can.”

Dr. David Hall has been doing something amazing since his battle with illness. He has been obtaining lumber and preparing the creation of a very special cross that fits into the grip of your hand. He began the spring of 2014 and has made 60, with another 60 in process.

At the first of August I gave a small metal cross to someone to hold during their spouse’s medical procedure. Later when we talked the person said they felt like they held it so tightly that they almost bent it! That was when I wanted to talk to Dr. Hall, knowing about his work. He has now given me over 20 of his cross creations. You can hold it as tightly as you want, it is already bent!

In August, Nan Fisher called to see if I made visits to the VA? Her father-in-law, Carrol Fisher was having a difficult time. I went by to see Carrol. He does not belong to our church, but I met Carrol soon after moving to Salisbury. I have stayed connected to him through his sons, Danny and Luke. One day I noticed a small wooden cross on his bedside table that he said someone made for him 10 years ago. I showed one of Dr. Hall’s to him and he was amazed. I showed him how you hold it and he was thrilled and was holding tightly to it as I left. He shows it to me when I go by and see him.

Wednesday, September 9 George Fisher, Carrol’s grandson had a surgical procedure in Charlotte. Danny did not want me to get caught in Charlotte traffic so when I left, George was in recovery…all had gone well. I showed Danny the cross and he was going to take it to show Nan in recovery. When I was back to my car I had a text from Nan, thanking me for coming and bringing the cross, and then attached was a picture of George’s hand, holding the cross tightly.

As I drove back to Salisbury I could not remove that picture from my mind. I decided to go by and show Carrol the picture. Carrol loves his grandchildren and was so happy to know that all had gone well. Then I showed him the picture of George holding the cross. He said, “That’s nice.” Then he looked closer and said, “Hey, that’s just like my cross!” I said, “Yes, it is one of Dr. Hall’s creations. You and George are now ‘CROSS-BUDDIES!”

As I spoke Carrol reached for his cross and held it tightly in his hand. I said, “Hey, Carrol I could take a picture of your hand and send it to George!” He said, “Would you?” I said, “SURE!” He then let me take the picture of his hand holding the cross!

As I left the VA, I called Nan to tell her I was sending a picture of George’s grandfather holding the cross. I said to tell George he and his grandpa are now ‘CROSS-BUDDIES!’ Nan could not wait to see it, and she said that George had not let go of his since I had left Charlotte! ‘CROSS-BUDDIES!’

So I ask, “To what are you clinging today, and what do you cling to in a crisis?” Do we cling to our material things, things that can easily disappear, ask those in South Carolina. Our faith proclaims that we can cling to the cross. The Apostle Paul tells us “the cross is foolishness to those who are perishing, but to us who are being saved the cross is the power of God.” Cross buddies, holding the cross as close to us as we possibly can!