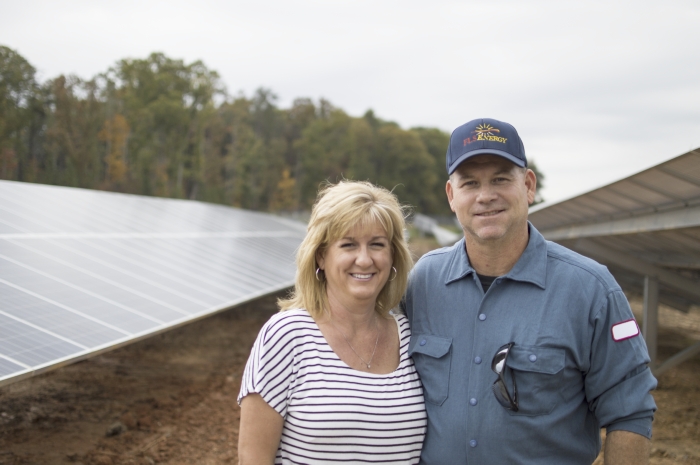 Josh Bergeron / Salisbury Post - Tim and Tammy Holshouser have converted 20 acres of land in the Gold Hill area into a solar farm. It's projected to be the second solar farm to be fully operational in Rowan County.

GOLD HILL — Tim and Tammy Holshouser are preparing to grow a new kind of crop on land once used to raise cattle.

Starting in November, the Holshousers will use 21.85 acres of land near their southeastern Rowan home to produce electricity. They’ll be the owners of Rowan County’s second solar farm. The Holshouser’s solar farm is slightly larger than one west of Rockwell on N.C. 152. Two more solar farms are planned for the Cleveland area.

Like other solar farms, power lines transmit electricity generated from sunlight to Duke Energy’s grid. Electricity from the Holshouser’s solar farm is then distributed to nearby houses in a circular radius.

Tim Holshouser said he was first contacted more than two years ago by Asheville-based FLS Energy about placing solar panels in Gold Hill.

“I almost just threw it in the trash can,” he said.

After a another look and a bit of reading about solar energy, Tim Holshouser said he seriously considered the company’s proposal.

“There’s just so many more pros to solar energy and using the sun for electricity,” he said.

When compared to previous method of generating electricity, such as coal, he said there’s no negative effects on the environment.

Until recently, the land was consistently used to raise cattle, Holshouser said. A number of economic factors contributed to his choice to switch to solar energy.

“Economically, you can do a lot better with solar farms,” he said. “It’s becoming harder and harder for a small-time farmer to pay taxes. Now, if you don’t make $10,000 in profit, you lose tax incentives from North Carolina.”

Tim Holshouser said he still plans to raise cattle, but not as many. If he decides to switch back to farming, he said the panels could easily be removed with relatively little effect on the surrounding property.

Construction on the solar farm started in July and is scheduled to wrap up within the next month. The 21-acre plot of land is already filled with solar panels. Tim Holshouser said the site should start generating power in mid- to late November.

“It’s a new type of farming and I see it really taking off,” he said. “What better way to produce energy than with the sun.”

Solar farms have already taken off around North Carolina.

Solar energy has resulted in $2 billion worth of direct investment in the state.

Marshall said North Carolina’s solar energy boom is attributed to a requirement that Duke Energy purchases a certain amount of its electricity from renewable sources and a state investment tax credit.

Rowan County Commissioner Craig Pierce, who attended a recent luncheon and tour of the solar farm, said he views the projects as a positive for tax revenue. It helps farmers pay taxes on land where they might not previously have generated any revenue, Pierce said.