Drumlines: The heartbeat of the band 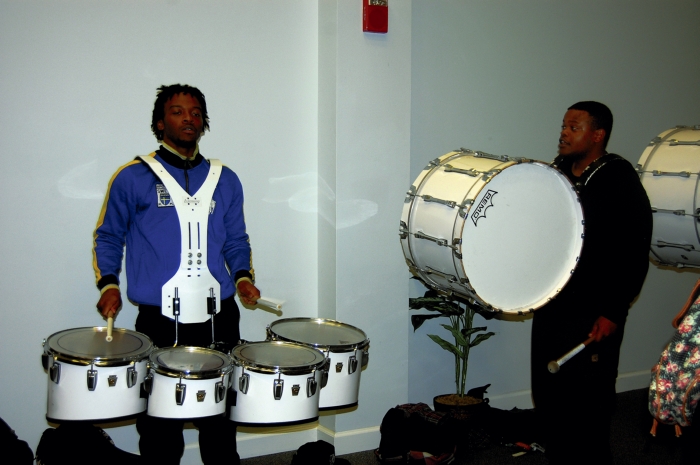 It’s the backbone of the band, the structure. It establishes the beat, rhythm and groove. It’s what the audience taps their feet and nods their heads to. It’s the heartbeat of the marching band, and it is known as the drumline.

Drumlines are the percussion section of the marching band, but they are so much more to band members and audiences alike.

“People enjoy a steady tempo and a pulsating beat,” Livingstone Marching Band Director Anthony Jones said. “The excitement that a drumline can create is phenomenal.”

Jones said drumlines have been around since the existence of bands. According to the New World Encyclopedia, marching bands developed out of military bands. The band was used to direct the movements of troops on the battlefield, but when that role died out, the bands shifted into more ceremonial roles.

Bands also had an important function for the funeral processionals of New Orleans and their the second line. A band would play slower hymns while taking the body of the deceased to the gravesite, but while walking back from the grave, up-beat music was played to celebrate the deceased person’s entry into heaven. The second line were friends and family who would march and celebrate behind the band.

“You had the drums in the background and people would march and step to it,” Jones said.

“A lot of times to keep the audience at bay and to keep everyone on certain sides of the field, they would have some entertainment,” Jones said. “And so bands started popping up.”

The drumline is composed of percussion instruments, including snare drums, tenors, bass drums and cymbals.

The drumlines, like marching bands as a whole, have a certain uniqueness from school to school.

Jones said the drummers of Historically Black College and University marching bands try to stay away from a strict military style of marching, in which they would just march and play.

“We, in the HBCUs, are known for our swagger, our style, our finesse and a little bit more of the soul,” he said.

With HBCU drumlines, there are more likely to be spinning sticks, twirling cymbals and swaying and rocking drummers.

Even though there is more dancing and movement within HBCU dumlines, they are still all in sync.

“As a band director, one of the things that I always tell my students is we’re performing for two people. We’re performing for the deaf and the blind,” Jones said. If the audience could not see the band, Jones said they would still be able to hear great music. And if the audience were deaf, they would still see the sharpness and uniformity of the band – with sticks going up and down at the same time and cymbals spinning in harmony.

And because of the drumline, the other band members can groove on beat as well.

Since the drums are some of the heaviest instruments besides the tuba, Kennedy said the rest of the band looks at the drumline with respect.

The cool factor of HBCU drumlines may have been one of the reasons the concept was turned into a movie in 2002 called “Drumline,” a film that earned over $56 million in the U.S. A television sequel called “Drumline: A New Beat” debuted in 2014.

Like the first movie, band members go to their university or college at the beginning of the summer to get ready for band camp in real life. For bigger bands, drummers actually do have to challenge other players to be able to get a spot on the field.

“One of the biggest things that is a similarity is you have to have the right attitude,” Jones said, remembering how the main character of the movie, played by Nick Cannon, had to learn respect and how to work within the team of a band.

One significant difference is the drum battle scene during the marching band competition in the movie.

“A lot of competitions will not let it be decided by a drumline at the end of the competition,” Jones said. Judging on just a drumline would be too opinionated, Jones said, so judges would find some other way to break a tie.

And although drum battles are very real, with thousands of videos on YouTube to prove it, no drummer would play on a rival drummer’s drum. Jones said the lines would never be allowed to get that close to each other.

Jalen Robinson, another drum major for the band, said the band would just not be the same without the drumline.

“The drumline is basically the metronome and the heart of the band. Without the drumline there would be no tempo,” he said. “It would just be incomplete.”