East Rowan comeback not enough in loss to Central Cabarrus 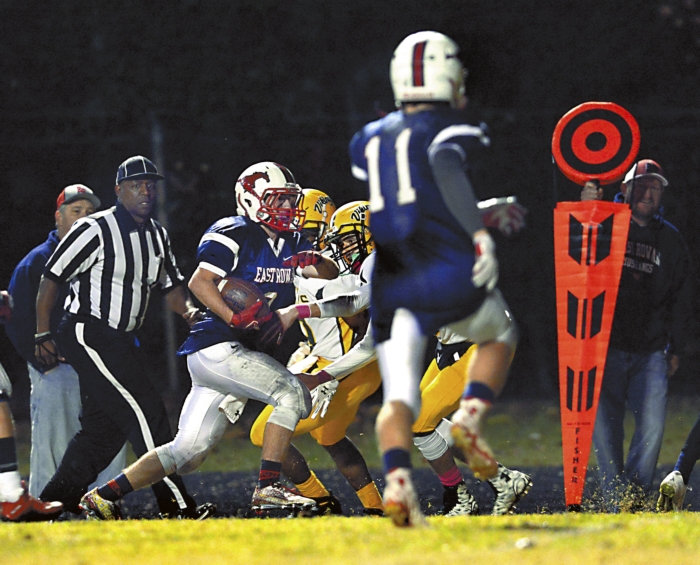 East's Wesley Porter 2 intercepted a Central Cabarrus pass and runs it down the sideline for a TD. photo by Wayne Hinshaw, for the Salisbury Post

GRANITE QUARRY — Just when it seemed East Rowan was on the verge of an epic comeback win Friday night, Central Cabarrus put the ball in the hands of senior running back Makhi Jones to save the day.

Jones broke a 16-yard touchdown run with 10:18 to play to propel the visiting Vikings to a key 34-24 South Piedmont Conference win, negating a remarkable 24-point rally by the Mustangs in the third quarter. A 66-yard pick six by Central’s Terron Gregory on the next series was icing on the cake and likely secured a State 3A play-off berth of the Vikings (5-4, 4-4 SPC). A season of frustration continued for East Rowan (2-8, 1-7 SPC) although this time they showed an unwillingness to quit.

“It just shows the kind of heart we have and how much determination we had to not lose this game,” said East junior defensive back Wesley Porter. “We just could not quite finish it.”

Porter sent the Senior Night crowd at East into a wild frenzy with just over 36 seconds left in the third quarter when he made a leaping interception of a Tyler English pass and zig-zagged his way down the left sideline for 27 yards and a touchdown and an improbable lead in the game. Max Wall’s pass to Steven Hardin for the two point conversion suddenly had East on top 24-21 as the final quarter opened. The Mustangs trailed 21-0 at the half and seemed lost on offense but that all changed midway in the third quarter.

First Bryson Johnson sacked Viking quarterback English in the end zone for a safety with 7:03 left. Then East defender Daniel Muncy pounced on a fumbled handoff at the Central 25. After a bad snap pushed them back to the 37, East caught a break when Max Wall threw a 37-yard TD pass to a leaping Naquis Caldwell in the end zone. A flag flew for offensive pass interference against Caldwell but after a conference, the officials waved off the penalty and awarded East the touchdown.

“We were both battling for the ball,” said Caldwell who had five catches for 91 yards on the night. “It was definitely a big play but they said there was no foul. We faced some adversity tonight and made a good run but just couldn’t do it in the end.”

Caldwell’s score and Wall’s two point run made it 21-10. The inspired East defense then forced a punt and Wall, who switched to quarterback for starter Justin Smith after halftime, broke an option run for 48 yards to the Viking six then scored on the next play with 1:25 left in the third quarter. Wall’s two point conversion run was stopped just short but East was within 21-16 and had the momentum. That set the stage for Porter’s pick six and a 24-point explosion in a seven minute span of the quarter.

Viking head Coach Donnie Kiefer said the difference in the second half was Max Wall and an inspired Mustang defense. “We had the big lead in the first half but got pinned deep in the third period and could not dig out of it,” he said. “The big difference was putting Wall at quarterback because he is just so dangerous.”

Wall had a versatile performance with 27 net rushing yards 126 passing yards and 19 yards receiving. He passed one score and ran for another. But he was also harassed by the Viking defense for nine negative yard carries including 3 sacks.

But Kiefer had his own ace in the whole in his hard-nosed senior runner Jones. At just 5-7 and 170 pounds, Jones took back the game in the fourth quarter by running over and through the East defense. Jones managed just 24 yards in the first half but scored on a pair of nine yard runs to secure the early 21-0 lead. In the fourth quarter, however, with his team suddenly behind, Jones returned a kick-off 20 yards to mid field then carried the ball on eight of the next nine plays. His tackle breaking 16-yard run put the Vikings back ahead for good just over 10 minutes left 28-24. Gregory’s interception return for a score less than two minutes later was the dagger that let the air out of the East comeback.

Keifer said it was not any special plays the Vikings were running in the crucial final quarter, it was “the heart of number 9, Makhi Jones. He was breaking tackles when our other guys were getting stood up at the line.” Jones finished the night with 19 carries for 115 yards and three touchdowns.

Jones agreed that his heart was in the right place during the final period when he scored the go-ahead score then later carried the ball nine straight times to run the clock down. “I just love this sport and on every play I just try to give it all I’ve got,” Jones said. ” My goal is to simply get as many yards as I can and to score. But I give big props to my offensive line tonight.”