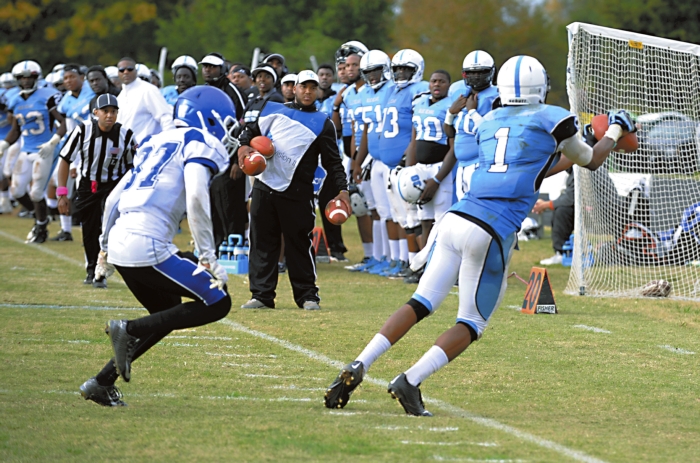 Wayne Hinshaw/for the Salisbury Post ... All-American receiver Jalen Hendricks (1) makes a great catch along the sideline. The grab at the FSU 8-yard line led to a Livingstone touchdown.

She would have loved how the Blue Bears didn’t do nothing nice and easy in a 42-35 overtime victory against Fayetteville State.

“No, nothing was easy. Nothing at all,” quarterback Drew Powell smiled at Alumni Stadium, where Livingstone (4-3 overall) squared its CIAA record at 3-3 and positioned itself to post its first winning season since 1998. “We had this game won in the first half, again in the second half and finally in overtime. That’s the thing about this team — we’ll fight you until the end.”

They had to against FSU (4-5, 4-2), which overcame a 14-point fourth-quarter deficit and forced OT when Chris Hubert fielded a bouncing punt and returned it 90 yards for the tying touchdown with eight minutes remaining. Livingstone went ahead in overtime on a 2-yard TD run by Latrell Flowers and secured the win with Billy Moore’s game-ending interception.

“I told the guys to just keep doing things the right way,” coach Daryl Williams said after Livingstone snapped an 11-year losing streak against FSU and gained its first homecoming win in 16 seasons. “And when you do that, good things are bound to happen.”

They happened to Powell, the left-handed senior who completed 28 of 35 passes for 364 yards and two scores. And to receivers Jalen Hendricks (9 catches for 135 yards), Arthur Bowden (8 for a career-best 173) and Flowers (8 for 64). And to junior linebacker DeMarcus Nolan, who was a sideline-to-sideline terror and made 18 tackles.

“It’s just D-Y-J — do your job,” Nolan said amid the festive, post-game celebration. “That’s all we did. It seems like we’ve got to have that fight. It’s what’s in us. We’ve got to sacrifice for the team and try to make big plays.”

It was fitting that a game filled with memorable moments ended with Moore’s first pick of the year. On first-and-goal from the 2-yard line, FSU quarterback Derek Bryant aimed a fastball over the middle intended for a receiver in the end zone. Moore — who had a choice to blitz or stay in coverage — raised his hands, swiped the ball and fell to the ground at the 3-yard line, beginning a massive on-field celebration.

“I saw the back on my side, so I’m thinking, ‘I might not get there (to the quarterback),'” Moore explained. “So I waited, thinking it would be a quick slant, and the ball came right to me. Then I felt the whole team pile on top of me and it was getting heavy.”

Fayetteville State coach Lawrence Kershaw lamented the final play and the outcome. “A tough loss,” he called it. “It came down to mistakes and we just made one more than they did.”

Livingstone seemingly had the game salted away after Powell tossed a short touchdown pass to William Tatum, providing a 35-21 lead with 12:04 to play. But the Broncos responded quickly and decisively a minute later when Bryant lobbed a 20-yard TD pass down the left sideline to Hubert. Then, after forcing a Livingstone punt, Hubert caught the Blue Bears sleeping by fielding a one-hopper and jetting past everyone to tie the score.

After the Broncos made it 35-35 all, both teams had a chance to win in regulation.

FSU then went on a 10-play, 45-yard drive that reached the Blue Bears’ 29 with less than a minute left in the game. Trying to get a little closer for a winning field goal try, QB Bryant tried a pass down the right sideline, but Livingstone cornerback Kevin Williams made a probable game-saving interception at the five-yard line.

Williams, a 6-2 junior, had a size advantage against the FSU receivers and had three key pass break-ups earlier in the game. He was shaken up on the interception but was able to return to the field in overtime.

“Nothing is ever given to us,” said Bowden, a senior out of West Montgomery High School. “We’ve got to take it, even when it’s right in our hands.”

The Blue Bears accomplished that in the extra series, igniting a bonfire of fanfare for its long-suffering program and fan base. Few seemed to care that nothing came nice and easy.

“I’m not too fond of the years before I got here,” said Powell, the record-setting senior. “But I’m proud to be the quarterback leading them to a place they’ve haven’t seen in a long time. That’s what feels the best.”

Just a week after the Blue Bears left the same field heart-broken after a 23-21 last-minute loss to Winston-Salem State, they got to enjoy Homecoming happiness.

“This sure feels better than last week,” said senior nose tackle Eric Horne, a 330-pound inside warrior against the run.

NOTES: Livingstone can secure a winning season if it beats visiting J.C. Smith next Saturday. …. The Blue Bears, Winston-Salem State and Smith are all 3-1 against Southern Division teams entering the CIAA’s final weekend. WSSU, which handed Livingstone a soul-crushing defeat a week ago, hosts Fayetteville State in its regular-season finale.

Falcons get the goose egg: Solid defense contributes to…