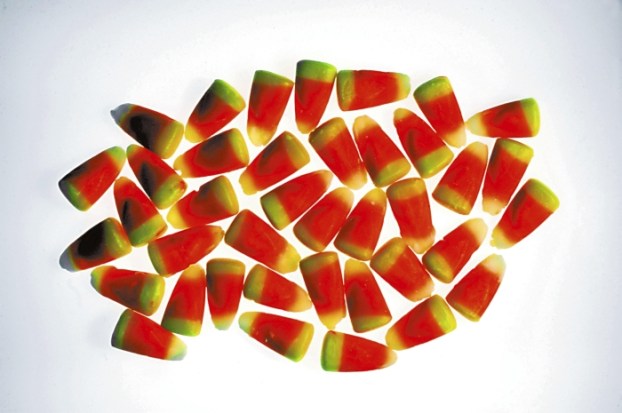 Recently, while my grandchildren were spending the day, they had an unsatisfied taste for jelly beans from the Candy Shoppe on Main.

Entering the shop, that desire suddenly expanded for candy corn. You know, the over-sized kernels of orange, yellow, and white sugary candy shaped like corn kernels. The candy always associated with Halloween is in its peak season of harvest now.

Most of us elderly children remember growing up eating candy corn. I remember the sweetness of the sugar mixture being so intense that it make my eyes cross, if only momentarily. Seeing a bag of the candy corn sets off a nostalgic bell in my mind. Tasting it reminds me of going trick-or-treating in my youth, going door to door in search of sugary delights. Of course, my mother was always right on my heels to intercept the really good treats before they hit the bottom of my brown paper bag. She let the candy corn drop into the bag.

Some folks say that the candy corn is Halloween’s equal to Christmas’ fruitcake. You have it in your home, but you don’t eat it. Well, I disagree because I like fruitcake at Christmas time, but it can last all the way to February.

Candy corn won’t last that long in your candy bowls. Every time you pass the bowl you nibble on a handful of the corn’s sweet nothingness.

Knowing how to eat candy corn is like knowing how to hang your toilet paper. Do you hang the paper with the loose end of the paper coming over the top of the roll or coming from under the roll? Does it really matter?

Candy corn has been around since the 1880s. Candy maker George Renninger is usually given credit for the invention in Philadelphia. He first marketed the candy under the name of “Chicken Feed” in a box with a rooster on the box. I guess it made sense that chickens eat corn, so candy corn could be chicken feed.

The corn didn’t start as a Halloween candy. The appeal to the customer was to tap into the American agriculture customs. Most of the country had its heritage in farming, and the crop harvests were in the fall. There you have “chicken feed,” or candy corn, fresh from the harvest.

The recipe for candy corn has remained the same since the 1880s. It contains sugar, corn syrup, vanilla, marshmallow creme, and yellow, orange and white coloring, confectioner’s glaze, and sometimes honey.

There are also candy pumpkins made with the same formula with the exact taste and orange color. Now we have red and green “reindeer corn” at Christmas, red and pink “cupid corn” at Valentine, green, pink and lavender “bunny corn” at Easter and lastly, red, white and blue “freedom corn” at the Fourth of July.

The National Confectioners Association says there will be 35 million pounds of candy corn produced this year. They say that is 9 billion kernels of corn.

You would think that candy corn must be America’s favorite Halloween candy. The Confectioners Association says no way. Their most recent statistics (2013) still had the number one candy being chocolate, with candy corn a very distant second place. Third place on the favorite Halloween candy list are gummy candy, chewy candy, hard candy, lollipops, licorice, gum and mints all grouped together.

Statistics get strange here. Candy corn always shows up on the Halloween list of most hated candies. People must just prefer chocolate.

M&Ms makes a limited edition amount of white chocolate candy corn. There are candy corn-flavored taffy and lollipops. There is a brown-colored Indian candy corn. Starburst has a fruit-flavored candy corn.

You can mix candy corn with roasted and salted peanuts for a great party snack. The candy sweetness and salty peanuts blend together.

There is a recipe for putting candy corn in an airtight container of vodka and aging it for at least three hours for a special sweet drink.

On Amy Erickson’s food blog, she suggests rolling three to four kernels of candy corn up in a ball of dough and deep frying it in hot oil. She says, “What do we do to things we don’t need, want, like? We fry it. … Frying makes everything better.”

A final lists of unimportant, but interesting facts:

• An open bag of candy corn flavor will last three to six months unless you eat it first.

• An unopened bag will keep the candy corn fresh for nine months.

By Lizzy Roy Salisbury Academy The local climate which allows for a fall and winter growing season – where greens... read more