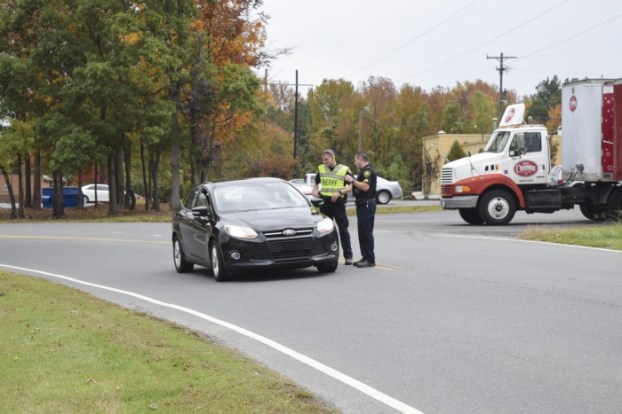 Rowan County Sheriff’s deputies on duty at Rowan-Cabarrus Community College’s North Campus reported hearing shots in the woods behind the 400 building at roughly 2 p.m., according to the Salisbury Police Department.

The school was placed on a precautionary lockdown at the advice of the Salisbury Police Department while the Sheriff’s Office investigated the source of the shots. Deputies parked in front of entrances to the college and turned cars away. Just off the Jake Alexander Boulevard entrance, Deputies Coble and Addison directed students, faculty and staff and concerned parents into the parking lot at Arby’s to wait.

According to Coble, the Sheriff’s Office believes that the shots originated off campus, on land that backs up to the school property. He said the lockdown was a precaution until deputies were able to locate the exact source of the shooting.

In Arby’s parking lot, people rolled their windows up against the rain and waited to hear something. Joseph Gareis was on his way to a 3 p.m. psychology class when deputies turned him away, saying it wasn’t safe at the moment to go on campus. He said he was a little concerned, but took comfort in the fact that the deputies didn’t seem worried.

Allison Ogden and Alesia Lewis were waiting to be let in to pick up their children. Ogden and Lewis both have a child in RCCC’s S.O.A.R. program, they said. The program is held in the 400 building. But while they, too, were concerned for their children and for people on the campus in general, they were not afraid.

She explained that the children’s teacher had been texting the parents to let them know what was going on and to make sure they knew that their children were safe in their classroom.

“They feel like this is just precautionary,” Ogden said.

“I’m ready for them to go ahead and lift this thing,” Coble said of the lockdown.

Rowan-Cabarrus Community College lifted the lockdown at 3:28 p.m. and the campus was deemed secure.

“We appreciate the work of the law enforcement in protecting and investigating the reported gun shots.” Dr. Carol S. Spalding, president of Rowan-Cabarrus Community College. “Their rapid response and attention to this college is very much appreciated. I also want to thank our students, faculty and staff for their cooperation. I’m grateful to all who responded in accordance with our policies and procedures to keep us all safe.”

State asks feds not to rule on Alcoa’s relicensing

A letter sent Wednesday by the N.C. Department of Justice to federal regulators represents the latest in a complicated legal saga that... read more