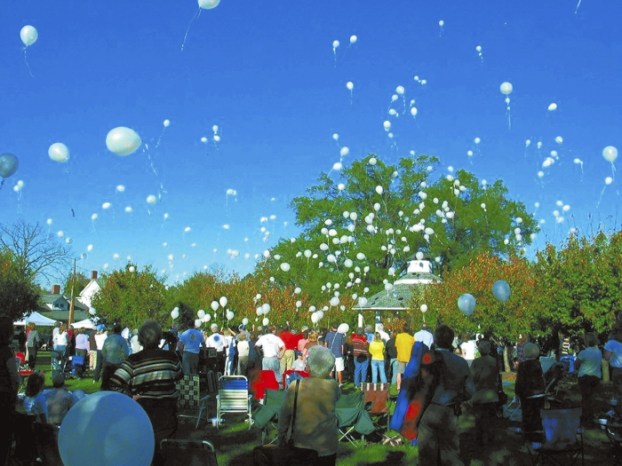 Balloons with notes to attached are released during the 2011 Voices of Hope event. File photo

Lori Yang admits she’s probably the least prepared she’s ever been for Voices of Hope, the concert she and her husband host each year to remember children who have died.

But she’s got a good reason. In the past year, she and husband Steve have adopted two sons from China.

“I have two children who do not speak English, and have special needs,” she says.

Luke is 7, and Aaron is 14. They’re both adjusting to life in a big, boisterous family.

Add to that a world championship softball title this summer by daughter Ellen, 12, and her coaching dad, a new school for daughter Ashley, 9, and college application time for the oldest Yangs, John and Alex, 17, seniors at Salisbury High School.

A big part of the day is of course, the music, and Lori has a good slate of performers lined up.

“I am ecstatic about that,” she says. “That’s the biggest thing.”

She’s also been doing some fundraising — not as much as usual given her busy schedule — but the Jumbotron screen which shows photographs of children who are now deceased is a big expense. Lori estimates she has a collection of about 50 photographs that grieving families have submitted over the years.

The concert raises money for the Michael Yang Foundation, which the Yangs started after the death of their son in 2001. The foundation supports Circle of Hope, which provides free group and individual counseling for bereaved parents. The group meets at 7 p.m. the second Thursday of every month at Steve’s dental practice, located at 2290 Statesville Blvd. The group also has a fellowship dinner at 7 p.m. every fourth Thursday at Ryan’s, 730 Jake Alexander Blvd. South.

Lori says that the counselor, Julie Gainer, tailors small groups for whatever the needs are. There have been groups for pregnancy and infant loss, loss by suicide, and loss of older children, for example.

Despite her full schedule, Lori finds time for all six of her children.

In her concert notebook, she keeps a note from daughter Ashley: “Thank you for helping me do my stuff even though you have a concert to work on.”

For more information about the Voices of Hope concert or the Circle of Hope support group, visit www.michaelyangfoundation.org.