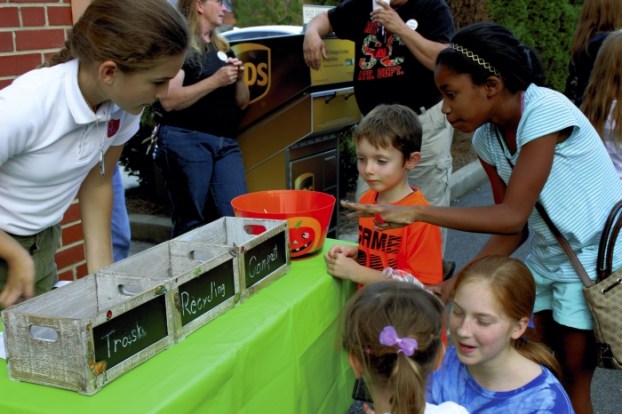 The local climate which allows for a fall and winter growing season – where greens such as broccoli, cabbage and collards can grow in the months of November through March – has also become a climate of sustainability awareness that engages the local youth.

Student volunteers from Salisbury Academy were members of the school’s Green Team – a student-driven component to the academy’s Project Green Space initiative.

Representatives from Two Pigs Farm in Cleveland were present, cooking and serving samples of their own numerous types of pork sausage – kielbasa, garlic sausage and others – along with sausage sent from Wild Turkey Farms in China Grove.

The presence of local growers like mushroom farmers Ron and Paula Herion of Upsidedown Farms in Cleveland and the sharing of natural foods such as the locally-sourced cookies from Abigail’s Cake Affair, fulfilled Bread Riot’s mission by connecting event-goers with local foods.

And the participation of Salisbury Academy’s students conveyed a meaningful message that sustainability must be taught to and engrained in the younger generations.

“If we’re going to go to this effort to produce really good food, we need to involve the younger people,” said Eric Bowen, executive director for Bread Riot.

Event participant Rick Godby of Spencer was originally drawn to the Meat and Greet to learn more about food offerings from local farms, and was pleased to see the young students promoting local foods and environmentally friendly practices.

“I’ve heard stories about kids not even knowing what a cucumber or tomato looks like in its natural form,” said Godby. “It’s all about sustainability. We need to encourage and embrace that.”

By Susan Shinn For The Salisbury Post Lori Yang admits she’s probably the least prepared she’s ever been for Voices... read more