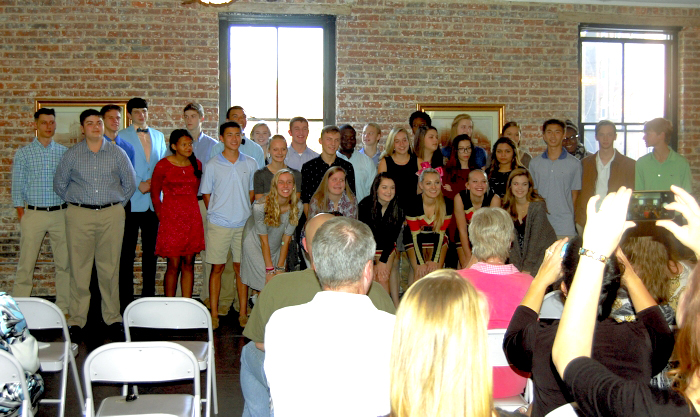 Salisbury Post/Amanda Raymond The 20 new inductees of the Rowan County Student Leaders gathered with friends and family on Friday to celebrate their acceptance into the group.

After sorting through 142 applications, the group chose whom they saw as the top applicants from schools all over Rowan County.

“It was a really hard decision and hard process for us all to make, but we’re super proud that you’re each here,” President Tarik Woods told the students.

Woods led the students in the RCSL’s oath to support and follow the laws and ordinances of Rowan County and support each other in success.

“(The students) are great examples for what we want to see in our young people,” Alexander said to the family and friends attending the event.

“You said you all wanted to be here for leadership. You’ll get that, but don’t give up. Stay involved throughout your whole lives,” Sheffield said.

Woods said the group was created to give students in Rowan County something they could call their own while changing the perception of young people in the area.

“We didn’t feel there was enough student-led and student-organized events in the city and the county,” he said.

“I think it’s really important for Rowan County to have a group of youth that can be a positive influence on the rest of the county,” she said.

New member Bethanie Stauffer, also a sophomore at Salisbury High School, said she had already participated with the group during their community volunteering and was excited to volunteer as an official member.

“I want to do more volunteer hours and … meet some people from other schools as well,” she said.

Jamie Knorr, parent of inductee Ethan Knorr, a sophomore from Salisbury High School, said the organization is a great way to instill leadership in the students.

“I just think that it is a wonderful program and brings leadership to the schools and has the schools represent the county,” she said.