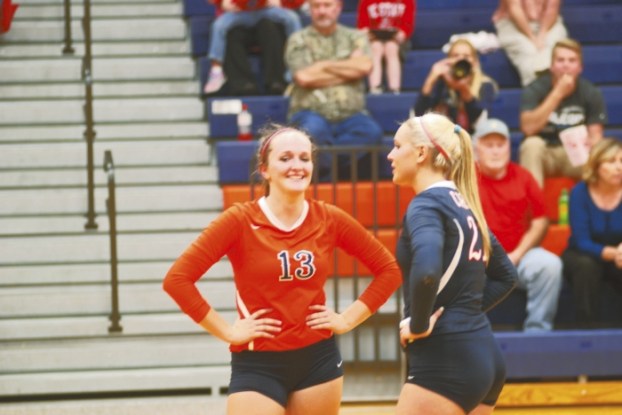 Dennis Davidson/Salisbury Post ... What pressure? Carson’s Morgan Hester (13) and Jordan Osborne (21), both seniors, enjoy a moment during the second game of Thursday’s playoff win. Interestingly, the score was 24-24 at the time. Carson won that game, 26-24.

CHINA GROVE — It was a sweep, but at the same time, it was a cliff-hanger.
Host Carson was great when it had to be and beat old rival North Iredell, 28-26, 26-24 and 25-17, on Thursday evening in the third round of the 3A state playoffs.
Mallory Weast, a 5-foot-6 freshman who leaps like a 6-footer, pounded 19 kills for the Cougars, and Carson’s veterans played calmly in every clutch situation.
“We’re really good in the tough situations,” Carson senior Morgan Hester said. “We practice those situations all the time, and we can keep pushing. Instead of getting tight, we get more energy.”
North Iredell led 24-23, 25-24 and 26-25 in the opening set. Carson faced three pressure-packed set points but weathered them all.
A kill by Elena Turnbull got the Cougars even at 26-all, and libero Jordan Osborne made a dig with her nose on the floor that allowed the Cougars take the lead. Hester’s block for set point triggered a mini-celebration.
“We played really good defense and winning those last points was crucial,” Turnbull said. “That’s where we got the momentum and we never let it go.”
Everyone agreed those final points of the first set were the key to to the match.
“Three set points and we should’ve closed it out,” North Iredell coach Natalie Tribble said. “We kept battling and scrapping, and we’ve got girls who can do amazing things, but losing that first set deflated us.”
Weast had nine kills in the opening set, while Turnbull had five.
An explosion by Turnbull pushed Carson to a 10-4 lead in the second set, but North Iredell (18-6) clawed back to 15-all. Carson (28-2) jumped back on top 24-21, but North Iredell got even at 24-all.
With the set up for grabs, Carson made the plays again.
Lindsay Elmore’s kill made it 25-24. Turnbull made a tremendous, spinning pass on serve-receive to direct the ball to Hester, and Hester set up Weast for the kill that decided the set.
“Coming in we knew this was going to very level competition,” Weast said. “North Iredell was good, good enough to beat us if we hadn’t played all-out. But we brought it all.”
Madison Barnhardt had three of her four kills in the second set.
Carson’s blocking was sensational in the third set, with Hester and Turnbull accounting for three straight points on combo blocks at one juncture.
“We did block well,” Carson coach Kelan Rogers said. “North Iredell has girls that hit the ball hard at the net, but we could block them. They aren’t one of those teams with girls who can hit over the blocks.”
Elmore, a 6-foot-1 sophomore who was the tallest person on the court, had a dominant third set.
“They had a very fast offense,” Elmore said. “We had to adjust, but we did.”
Carson jumped out 6-1 and 13-5 in that third set and never let North Iredell believe it could get back in it.
“Watching Carson in warmups, I didn’t feel like this would be a match where we were at a physical disadvantage as far as height or strength,” Tribble said. “But 14 (Elmore) killed us in the middle.”
Turnbull had 13 kills and five block assists. Hester had three blocks and six block assists. Kaytee Leonguerrero had nice sets, two block assists and a kill for the final point of the match.
In addition to Osborne, the Cougars got steady play on the back row from Sarah Boyd and Kristen Cauble.
“It was a good match, neck-and-neck for the first two sets,” Rogers said. “It was a like a men’s match — just serve-receive, set and kill, back and forth. We didn’t play not to lose, we played to win, and I was very pleased with our aggressiveness.”
Carson, West Henderson, Cox Mill and South Iredell are the final four teams in the West Region.
Cox Mill beat top-seeded Hickory, 3-1, on Thursday.
Third-seeded Carson plays at No. 2 seed West Henderson on Saturday. The time of the match was not immediately set.