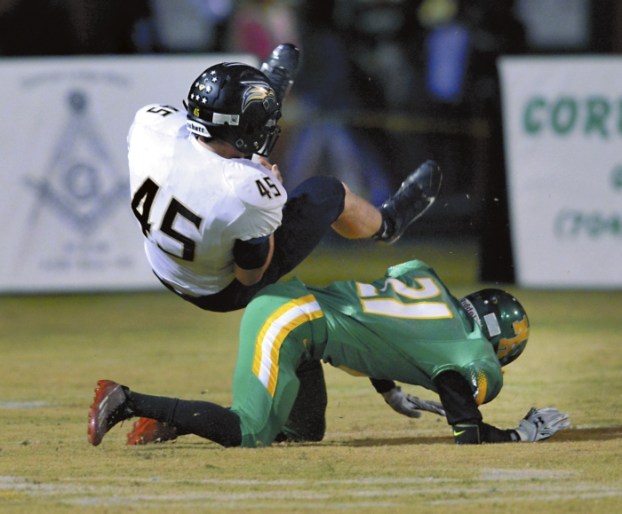 Prep Football Notebook …
South Rowan punter Marshall Long averaged 50 yards on four punts in Friday’s 49-0 loss to Hickory Ridge. His punts sailed 44, 60, 46 and 50 yards.
“We played pretty bad on both sides of the ball,” South coach Daniel Yow said. “But Marshall was a bright spot.”
Long is averaging 46.1 yards on 45 towering punts this season, a pace that would break every school and Rowan County record.
Yow tracks the stats posted on MaxPreps and believes Long is not only the state leader, but the national leader in punting average.
Long has placed 12 punts inside the 20-yard line. His longest punt traveled 75 yards.
Long visited Virginia Tech Saturday and was on hand for Duke’s four-OT win over the Hokies. Long is scheduled to visit Georgia this weekend.
Long would like to kick for an ACC or SEC school.
He’s received offers from Army, The Citadel and Syracuse.
Long would have been a likely candidate for the Shrine Bowl team, but Yow explained that he missed Shrine Bowl combines during South’s head-coaching transition.
Long has been named to play in the High School All-American Game in San Antonio on Jan. 9. That game will be televised on NBC at 1 p.m. EST.
“We hate Marshall won’t be in the Shrine Bowl, but he’s going to be in something even bigger,” Yow said.
•••
South Rowan placekicker Brennan Lambert will definitely kick in college.
Catawba, Yow’s alma mater, is on the list of schools interested in Lambert.
“He’ll probably go to a smaller school like Catawba or Campbell, but there’s still a chance a big school will come in on him,” Yow said.
Lambert has made longer ones this year, but he missed a 45-yard field goal that would’ve gotten South on the board against Hickory Ridge.
“There was a N.C. State coach at the game to see Hickory Ridge’s tackle,” Yow said. “Brennan is such a huge N.C. State fan, he probably got a little nervous.”
***
South Rowan travels to Robinson Friday, so things aren’t going to get any easier.
Robinson has shut out three opponents this season, including the last two. The Raiders will have their work cut out to put something on the scoreboard.
“Robinson is probably playing as well right now as anyone in our league,” Yow said.

NORTH ROWAN
North has made a turnaround from 1-5 to 4-5 and has a realistic chance to be the first team in school history to win a conference championship after a 1-5 start.
“It’s not like we’ve arrived, by any means, but we’ve started to build some confidence on the offensive side of the ball where we’re really young,” Hampton said. “If our offensive intensity can match our defensive intensity, we can win any ballgame we play.”
North has made similar comebacks in recent seasons, losing non-conference games early, usually against bigger schools, but then getting on roll later in the season against league opponents.
North’s 2011 team started out 1-5 but qualified for the state playoffs and finished 4-8.
North’s 2009 and 2010 teams started 0-4, but both got to 2-4, qualified for the playoffs and finished 5-7 and 6-6, respectively.
•••
Sophomore Josh Ellis threw four TD passes against East Davidson, doubling his total for the season.
“He’s making strides, taking better advantage of his opportunities to make plays,” Hampton said. “He’s so quick, he can extend plays, and he’s getting better at keeping his eyes looking downfield for a receiver. He’s making better decisions on when to throw and when to tuck it and run.”
•••
The magnitude of North’s 58-0 pounding of East Davidson was surprising because East Davidson had won against Salisbury and lost a close game to Thomasville.
Friday’s game was North’s biggest margin of victory ever against a 2A opponent.
For many decades, North’s widest victory margin was 57 points, but when the Cavaliers went down to 1A for four years (2009-2012), they overmatched some league opponents. They broke the long-standing school record with a 60-0 mauling of North Moore in 2011. Then in 2012, the Cavaliers broke the record again with a 74-0 romp against South Davidson.
One note of caution: North lost the week after it won 60-0, and it also lost the week after it won 74-0.
•••
Chris Clodfelter, Keith Carroll, Malik Alford, Omar Lipscomb and Jaylen Brown intercepted passes for North against East Davidson.
North hadn’t intercepted five passes in a single game since 2001 when it needed all five picks to beat Lexington 36-34. Leonard Atkins and Jason Barber had two interceptions apiece that night.
•••
North’s recent five-game losing streak was tough for defensive coordinator Steven Williams.
“When I was at West Rowan we lost five games in five years,” Williams said.

CARSON
Tackle Matthew Beaver has recovered four fumbles the last three weeks and had two in Friday’s 43-13 win against Northwest Cabarrus.
Beaver was in on 11 tackles against the Trojans. He had a sack, a forced fumble and two tackles for loss.
•••
Tackle Logan Parker also was in 11 tackles and had a sack on Friday. Spur Garrett Pell made nine stops.
“And our linebacker crew (Ryan Bearden, Jacob McCurry and Alex Deal) is always solid,” Carson coach Joe Pinyan said.
•••
Long snapper Isaac Bell is listed as a backup linebacker, but he’s caught a pair of 2-point conversions in recent weeks.
“He made a great catch for two points against Northwest,” Pinyan said. “He went up to make a catch and then he got his feet down inside the lines. We may have to make him a receiver.”
•••
Halfback Andy Lear was injured (stinger) Friday, but Bailey Rayfield stepped in and scored two touchdowns.
•••
Carson rushed for nearly 300 yards against Northwest.
Pinyan praised center Nick Holman and left guard Ethan Collins for leading the offensive line effort.
•••
Fullback Dylan Livengood had had three 100-yard rushing games in his last four outings and needs only 37 yards to reach 1,000 for his career.

WEST ROWAN
Concord is always the team to beat in the SPC, but coach Glen Padgett wasn’t just relieved after a pretty amazing 17-10 win against West Rowan, he was ecstatic.
“Really proud of our guys right now,” Padgett said. “They understood the level of effort it was going to take to win in a tough road environment and to win against a great team, a great coaching staff and a great program, and they came through with that effort.”
•••
Junior Kortez Weeks is the county’s leading receiver — by a lot.
With 47 catches for 614 yards and eight TDs, Weeks already has surpassed the nice numbers he posted as a sophomore.
Weeks has produced back-to-back 100-yard receiving games the last two weeks against East Rowan and Concord. He’s the first Falcon to accomplish that feat since Jon Crucitti had three straight 100-yard games against Mooresville, South Rowan and west Iredell in 2009.
Weeks has 1,191 receiving yards and passed Patrick Hampton and Chavis Cowan on West’s all-time receiving yards list on Friday.
Weeks is currently sixth behind Crucitti, Lamont Savage, Horatio Everhart, Jarvis Morgan, Donald Gray and Brantley Horton, but he’s only 6 yards behind Horton.
•••
Imposing defensive lineman Derrick Moreland missed the Concord game. It’s uncertain whether he’ll be able to make it back this year.

EAST ROWAN
East’s 49-0 SPC loss at Robinson marked the low point for the Mustangs in recent years. Robinson dominated from start to finish.
East (2-7, 1-6 SPC) had scored in 47 consecutive games and hadn’t been shut out since the 30-0 loss to Statesville that closed the 2011 season.
•••
East ran into a hot team clicking on all cylinders. Robinson went 0-11 last season, believe it or not, and 1-10 the year before that, but a move from 4A down to 3A as well as some key additions to the roster and the coaching staff, have made the Bulldogs a formidable opponent.
Robinson has won four its last five, with the only loss in that span, a 28-21 setback at A.L. Brown.
West Rowan and Hickory Ridge both trail Concord by a game in the SPC standings, but they’ll be hoping for some help from Robinson when the fourth-place Bulldogs, who have two league losses, take on the front-running Spiders next week.
•••
East’s defense has been stout most of the season, but it allowed four rushing TDs and three passing TDs against Robinson.

SALISBURY
Salisbury’s 14-6 loss to Thomasville on Friday was simply more of the game old thing.
“A darn broken record,” Salisbury coach Ryan Crowder said. “First-and-goal at the 10 and we get nothing. A blocked punt at their 28 and we fumble the next play. And we broke down after good drives several more times.”
Through it all the defense has played well for the Hornets (2-7, 0-3 CCC) and is second to West Rowan in the county stats.
Crowder praised linebacker Tywun Rivers, defensive end Naquay Simpson and cornerback Shaquez Strickland for their play on Friday.
•••
Salisbury has employed linebacker D.J. Alexander at quarterback some the last two weeks. He completed two passes for 42 yards against Thomasville, and Marcus Corry also had two completions and a rushing touchdown.
Salisbury has yet to throw a TD pass and has thrown 11 interceptions.
•••
Antwond Glenn rushed 15 times for 51 yards against a strong Thomasville defense. Glenn has 629 rushing yards this season and 1,569 yards for his career.

A.L. BROWN
The Wonders lost 37-27 at Mallard Creek on Friday and dropped out of the state’s top 10 poll, but it was their best showing in three tries against the Mavericks.
A.L. Brown coach Mike Newsome believes the Mavericks are the strongest team in the state, and the Wonders figure to be a tough team to deal with in the playoffs in the smaller half of the 4A classification.
•••
Quarterback Damon Johnson bounced back from his rough night against Hough to throw two touchdown passes (with no picks) against Mallard Creek.
Both of his scoring passes went to Sherrod Sutton, who made his first two TD catches of the season.
•••
Kicker Nate Williams has accounted for 100 points the past two seasons, with 49 last year and 51 this season.
•••
Sandon McCoy ran back a kickoff 91 yards for a TD against Mallard Creek, the Wonders’ first return TD of the season.
McCoy also has seven sacks.

DAVIE
After a bye week, Davie returns to CPC action against Mount Tabor on Friday.
Mount Tabor has been tough on the War Eagles in recent seasons, winning 11 of the last 13 meetings.
The schools have met twice in the playoffs in the last six seasons (2010 and 2012).