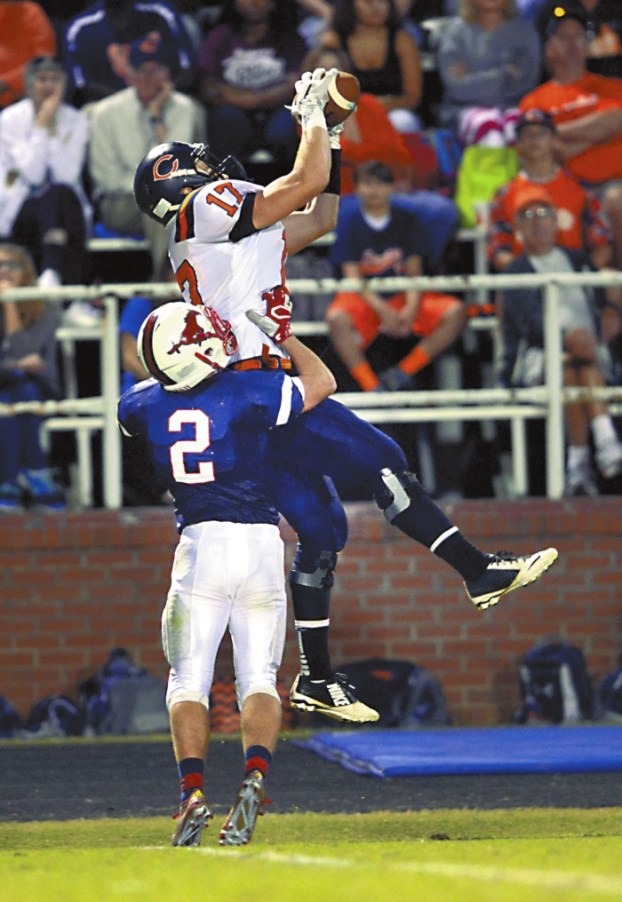 Wayne Hinshaw/for the Salisbury Post ... Carson receiver Brandon Huneycutt (17) goes high to catch this pass against East Rowan on Sept. 18. Huneycutt came down out of bounds on this play but he did have TD pass in the game. East’s Wesley Porter (2) is defending on the play.

CHINA GROVE — The first read for Carson quarterback Owen White was end Justin Copeland on a drag route.
The other end Brandon Huneycutt’s job was simply to sprint down the field to take the cornerback out of the play.
But Huneycutt did what he often does — he popped open behind the Northwest Cabarrus defense. Then he made a remarkable diving catch of a White pass for a big gain and a first down.
“Owen got some pressure, so he had to throw it quickly,” Huneycutt said. “Not much goes through your mind in those situations. You just see the ball and you go get it.”
Over the last three seasons, Huneycutt has made many catches just as good as Friday’s diving grab that was the highlight of a 43-13 South Piedmont Conference win against the Trojans.
Huneycutt tore the ACL in his right knee on a punt return against South Rowan last October, an injury that cost him the final four games of his junior year. He also plays for a program that doesn’t have a reputation for throwing the ball around. Still, his 101-yard game on Friday moved him to the verge of becoming the fourth 1,000-yard receiver in Carson history.
“He’s one of the best receivers I’ve ever coached,” Carson coach Joe Pinyan said. “He can catch the ball in traffic, and if it’s thrown anywhere in his area, he’s got a chance to make a play. He’s a great possession receiver. He has decent speed and really good hands.”
Pinyan said Huneycutt is a combination of two of the best pass-catchers he coached during his long tenure at Salisbury. Like former Salisbury tight end Riley Gallagher, Huneycutt always seems to be open. Like Patrick Doleman, he can go after the football in the air.
Huneycutt grew up attending Carson games. His older sister was a cheerleader, and the player he focused on watching was K.J. Pressley, who ranks second in Carson history and fourth in Rowan County history with 2,299 career receiving yards.
“K.J. was the guy I looked up to,” Huneycutt said. “I wanted to catch passes like he did. It would mean a lot to get 1,000 yards.”
Huneycutt’s career totals are 54 catches for 968 catches and 12 touchdowns. He’s probably headed for third place on the Cougars’ all-time list behind Cody Clanton and Pressley. He’s not far behind Travis Hayes, one of the original Cougars of 2006. Hayes finished his career in 2008 with 1,020 receiving yards.
As a sophomore, Huneycutt made only 13 receptions, but six went for touchdowns.
Huneycutt believes he made the best catch of his career that season against Hickory Ridge.
“I ran a post pattern, and Austin McNeill made the throw,” Huneycutt said. “The defender in front of me nearly intercepted the ball and there was another defender right behind me, but I jumped up and got it.”
He made 14 catches in his injury-shortened junior season.
His senior year has been by far his most productive. Carson still runs the ball 80 percent of the time, but Huneycutt has made 27 receptions for 382 yards. He caught his fourth touchdown pass of the season, a 55-yard completion from White, on Friday.
“Owen’s only a sophomore, but he’s right up there with McNeill,” Huneycutt said. “Both of them put the ball right in there, right where it needs to be.”
Pinyan wasn’t sure how well Huneycutt would come back from the torn ACL, and then he added to Pinyan’s worries by hurting his left knee in the gym. Pinyan recalls a humorous practice moment when Huneycutt became the first Cougar ever to be tackled by his own knee braces.
“I did mess up my left knee up a little bit, so now I wear a brace on both knees,” Huneycutt explained. “I’ve played football all my life, but it was something new learning to run with two knee braces. The first day of practice, I got them caught together, and I fell and hit the ground.”
He’s figured things out now.
Over the years, Huneycutt (6 feet, 181 pounds) has been a fine blocker on the edge for the Cougars’ running game. He’s strong from years in Pinyan’s weightlifting classes as well as fearless.
“He’s up there as far as the strongest kids on our team,” Pinyan said. “That’s key because a lot of the time our wide receivers are just wide tackles blocking in the running game.”
Huneycutt is one of Carson’s best athletes and had a chance to show off his arm on a trick play against South Rowan. His only pass of the season was a 78-yard completion to White. Huneycutt likes to joke that he was the team’s leading passer that night. White counters by reminding everyone that he was the leading receiver.
Carson (5-4, 3-4 SPC) still has some work to do as far as making the 3A playoffs. If the Cougars make it, Huneycutt will be a big part of it.
“Brandon makes all the routine catches,” Pinyan said. “And there are times he makes a great one when you don’t expect it.”

Livingstone to induct five into athletic Hall of Fame

SALISBURY — The Livingstone College Athletic Hall of Fame will welcome its 2015 class of inductees when five individuals are... read more