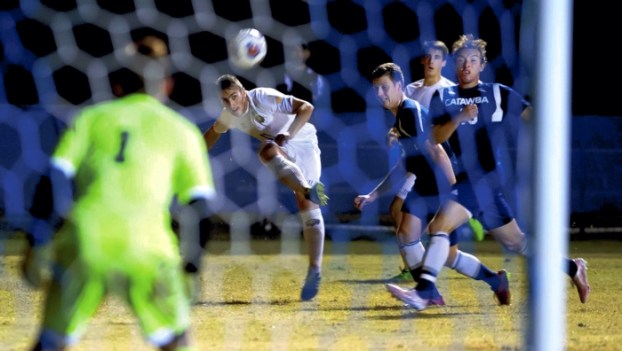 JON C. LAKEY / SALISBURY POST ... Pfeiffer’s Santi Moar (11) takes a shot from but it went wide and was easily gathered up by goalkeeper Christian Watts (left).

SALISBURY — Even perfection has its price.

Just ask the top-ranked and unbeaten Pfeiffer men’s soccer team, which had its hands full in Wednesday’s 4-1 victory at Catawba.

“We’ve had better days,” midfielder Martim Galvao said at soggy Frock Field after the Falcons won their 16th match. “It was a sloppy night and we couldn’t put them away, but that only made it more intense.”

It was a black-and-blue match that included a multitude of fouls, four yellow cards and a red issued to Catawba goalkeeper Christian Watts with 15 minutes left to play. Until that point, the Indians (5-10) made it clear they were playing for a purpose.

“We learned,” said Kenny Bonilla, one of four Catawba seniors recognized before the game, “that we can play with anyone, including the nation’s No. 1 team. When it was 11 on 11, it was anyone’s game.”

It was Pfeiffer’s in the first half. The visitors outshot Catawba, 8-4, and received goals from Galvao early and Cristobal Allendes late to mount a 2-0 halftime lead. Catawba swung and missed on two opportunities in the first six minutes, when Bonilla and sophomore Jack Ragen side-footed hard shots that sailed wide and right of the cage. Then after Galvao netted his sixth goal of the season in the 13th minute, Catawba’s Jack Pettett pushed a close-range drive over the crossbar — after a Pfeiffer defender had slipped out of position.

“To be real honest, I wasn’t that pleased with our performance,” said winning coach Bob Reasso. “I think we need to come into games like this with a better understanding of what’s going on and what we need to do to win it.”

Third-year Catawba coach Ken Hassler felt like guy who finds $20 in his pocket, then realizes he’s wearing someone else’s pants. “It’s a bit of disappointment,” he said. “I’ve been around long enough to know that when we play our game, we are as good as anybody in the country. Pfeiffer has a fantastic program. But I believe we showed today what we can do. We had chances early and could have been up 2-0 or 3-0. We just didn’t have the quality to finish simple chances.”

The match nearly turned into a fall classic in the second half. Watts, a junior from Plymouth, England, was spectacular in the Catawba net, turning aside shots with keen anticipation and acrobatic flair. When Bonilla took a feed from Belony Joseph and tucked a shot inside the right post with 32:34 to play, anything seemed possible.

“We knew we were still in it,” Bonilla said. “And they were still just another college team.”

Pfeiffer realized it was time for a gut-check — with a capital G.

“It had turned into a pretty physical game,” said Nathan Regis, the Falcons’ most-prolific goal-scorer. “And we weren’t controlling the ball enough. But we had to play hard to try to equalize.”

That happened with 14:59 remaining, when Watts made contact with an official while pleading a call. His ejection left the Indians with 10 players on the field.

“He just got caught up in the moment and lost his composure,” Hassler said.

Pfeiffer capitalized with a pair of late goals against backup keeper Kennedy Little — Santi Moar’s seventh of the year and Regis’ 21st — to cement the outcome.

“It’s frustrating,” said Catawba defender Phillipp Hollenhorst. “The chances were there. Unfortunately, we went a man down and they were able to get the ball to the right players. We were almost there. We just have to find the final piece to put this all together.”

NOTES: Bonilla’s goal denied Pfeiffer its ninth shutout. … The Falcons are ranked first in the Division II coach’s poll, but second in the Southeast Region behind Young Harris (Georgia). … Catawba closes its regular season Saturday at Lincoln Memorial. The Indians went 1-6 at home this fall, with four overtime losses.