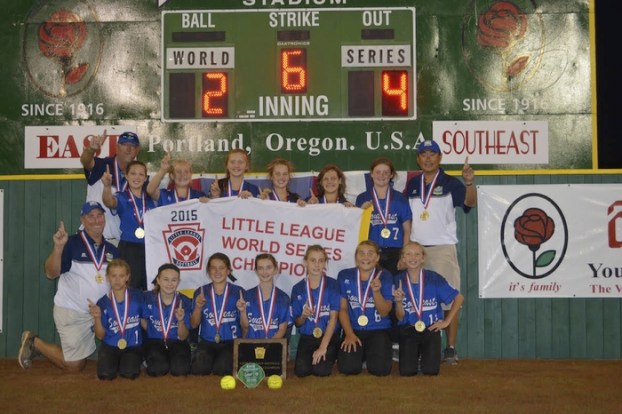 SALISBURY – Since winning the softball Little League World Series on Aug. 19, the players on Rowan Little League have been treated like celebrities.

“It’s an honor to be recognized in such a special way from a college in our community,” said

Ellen Yang, daughter of Rowan Little League Coach Steve Yang. “I’m very excited because I think it’s very cool to be recognized at a college. I’ve never been part of any activities at Livingstone, and I look forward to being a part of this.”

So does teammate Taylor Walton

“I’d like to thank Livingstone College for this opportunity to meet new people in our community,” Taylor said. “Being a part of this parade is a big deal. I know a lot of kids my age and kids in general don’t have the opportunity to do this.”

Taylor’s mother Kim Walton said the girls are “thrilled to death” to be in the parade.

“We’ve had so many people in the community reach out to us, but I feel like this is time for the girls to give back to the community” Walton said. “Especially the college community.”

Make no mistake about it: Homecoming is a major undertaking at historically black colleges and universities. For starters, it lasts an entire week. Alumni return to reminisce with former classmates, students have a plethora of activities in which to engage and committees spend months planning just the right events.

Fraternities and sororities participate in a step show to see who captures bragging rights, and countless time goes into organizing the Homecoming Parade.

“The parade is one of the featured events of Homecoming, and we certainly take seriously the decision about whom to ask to represent us,” said Livingstone College President Dr. Jimmy R. Jenkins, Sr. “I’m delighted to have the world champion Rowan Little League softball team members as our Honorary Parade Grand Marshals this year.

“Those girls and their coaches demonstrated to everyone that they’re about excellence, which is what we strive for at Livingstone,” Jenkins continued. “That’s why I join my wife Dr. Faleese Moore Jenkins and the entire Livingstone College family in saying we’re grateful they’ve accepted our invitation to participate in our Homecoming Parade.”

In keeping with tradition, a Livingstone alum has been tapped to serve as Grand Marshal, and this year that honor goes to Delores Johnson, president of The Livingstone College National Alumni Association.

“Winning championships isn’t easy, and winning the Little League World Series is certainly no small feat,” said Battle, a 1969 Livingstone graduate who in 2013 served as Grand Marshal with his wife Iris Miller Battle. “I cannot tell you how proud we are of those girls, and I think it’s fantastic they’re serving as Honorary Grand Marshals this year.

“The importance of Homecoming at HBCUs cannot be understated,” Battle continued. “Iris and I have received numerous recognitions over the years and have participated in events around the world, but I can honestly say it was really special to be asked by Livingstone to participate in their Homecoming Parade. Rowan Little League is truly deserving of this high honor.”

Though the girls were thrown a huge parade in downtown Salisbury as soon as they returned from winning the championship in Portland, Oregon, Jennifer Myers said they’re still excited about Saturday’s parade. Myers is treasurer of Rowan Little League and has become their de facto public relations person.

Yang, a local dentist, said Myers is invaluable to the team and he’s not sure what he and assistant coaches Rob Hales, whose daughter Kary plays on the team, and Eric Dowling, whose daughter Kaylin plays, would do without her.

“Jennifer is much more than a treasurer,” Yang said. “She’s been our event planner and has done whatever these girls have needed and I have needed. She’s been Johnny on the Spot … and I very much appreciate her.”

Yang said it’s great that Livingstone has asked the team to participate in the parade.

“We’re very, very honored,” Yang said. “It’s very humbling that a college of Livingstone’s magnitude has acknowledged our girls. It speaks volumes about how important what we’ve done is for our community.”

Since excellence is Livingstone’s theme, Rowan Little League is a perfect choice for the parade. The girls exemplified excellence not only by winning the World Series but also by showing benevolence to members of the Ugandan team, which lacked proper equipment.

“That shows the kind of character these girls have,” Yang said. “They don’t just think about themselves. They felt like everybody should have everything equal regarding softball equipment, and when they saw that the Ugandan team didn’t, they started asking questions of some of the parents and coaches and got the ball rolling on getting them what they needed. Outside of softball these girls have become really close, and I’m just proud of everything they represent.”

Just as Livingstone will be proud on Saturday when they represent the college.