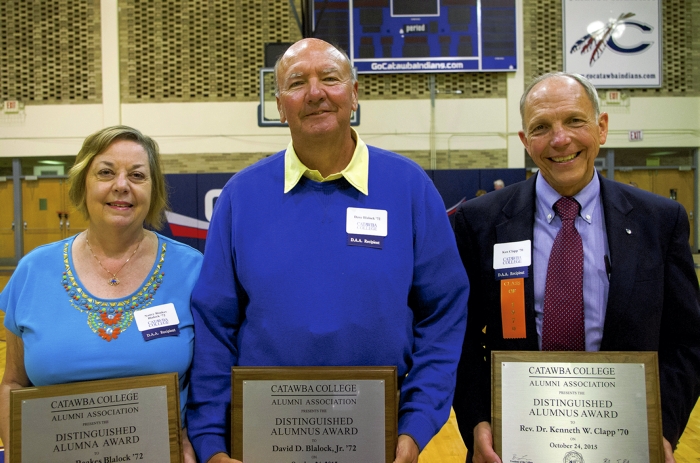 Three Catawba College alumni were recognized as recipients of a Distinguished Alumnus Award on Oct. 24 during Homecoming Weekend activities. The honorees included David and Nancy Blalock of Little River, S.C., both members of the Class of 1972, and the Rev. Dr. Kenneth Clapp of Salisbury, a 1970 alumnus.

Given annually by Catawba’s Alumni Association, these awards recognize individuals who have served their community, distinguished themselves in their profession and have served the Catawba College community.

David Blalock, a native of Wadesboro, and Nancy Roakes Blalock, a native of Salisbury, actually met on the Catawba College campus while students. They were married the year after their graduation and brag that they have been married 42 years. They are parents of adult daughter Lauren Blalock Sefton.

The Blalocks are both retired, David from a career as a textile sales executive, and Nancy from a career as a teacher. They are longtime members of the Chiefs Club at the Super Chiefs level and have worked to recruit new generations of Catawba students, assisting Catawba’s Admission Office as ambassadors at college fairs in their area.

They even felt so strongly about paying it forward that the two joined forces with Nancy’s brother and sister-in-law to established the Charlie T. Sr. & Louise T. Roakes Scholarships in honor of Nancy’s parents.

David currently serves on Catawba’s Board of Visitors.

When they’re not helping Catawba, the Blalocks find time to help others in their local community and their church, First United Methodist. David has served as a trustee and board chairman at the church, while Nancy has served as the church benevolence treasurer and a member of several church committees. She has also been an officer in the local PTA and the Music Boosters Association.

Outside of David’s professional affiliations with several textile organizations, he and Nancy also served as members of the Red and Black Society at Rhodes College, their daughter’s alma mater.

At Catawba, David majored in Business and made the Dean’s List several times during his years as an undergraduate. He was a member of the Advertising Club and a board member of the Circle K Club.

Nancy majored in Early Childhood Education and served on the Pioneer staff and as a Class Officer. She distinguished herself in and out of the classroom at Catawba and was named to Who’s Who in American Universities and Colleges.

The Rev. Dr. Kenneth Clapp, a native of Whitsett, serves as Catawba’s College chaplain and senior vice president. Additionally, he serves as Catawba’s director of the Lilly Center for Vocation and Values and has oversight for Black Lake Retreat Center near Asheboro.

Ken was introduced to Catawba College while a teenager when he accompanied a group from his home church, Mt. Hope United Church of Christ, to the Omwake-Dearborn Chapel dedication in 1964.

After graduating from Catawba, he went onto Yale Divinity School and Lancaster Theological Seminary and was ordained as a minister in the United Church of Christ. His vocational calling led him first to serve as pastor of Emanuel UCC in Lincolnton, and then onto the UCC’s Blowing Rock Assembly Grounds where he served as executive director of this facility before joining Catawba in 1989.

When he returned to Catawba as an employee, he was following in the footsteps of his great-great-great grand uncle’s footsteps by taking a leadership role at Catawba – his family patriarch, Jacob C. Clapp, served as president of Old Catawba in Newton from 1861 until 1900. He served first as college chaplain and assistant professor of religion, then later as chaplain and vice-president for student and religious life, responsible for all student services as well as teaching and the chaplaincy and two terms as interim dean of students.

He then became chaplain and senior vice-president and added to those duties was facilities, dining services, conferences and transportation.

Ken has been and continues to be very supportive of his alma mater. He has served on the Catawba Alumni Association and chaired the Class of 1970’s effort as it raised a $50,000 Challenge Gift in 1990.

He has established a scholarship at the college in honor of his parents, the late Ernest and Lillian Clapp, who always encouraged his faith journey and his pursuit of education.

For decades, he has been a fixture on the sideline at home football games, cheering on his beloved students and serving as a visible reminder of his support and faith in them.

His service does not end at Catawba, however, he chairs the First United Church of Christ Foundation, is a member of the advisory board of Piedmont Crossing Retirement Community, serves on the Boy Scouts of America Eagle Scout Board of Review, is an advisor to Catawba’s Dead Athenian Society, the Philomathean Society and to the Retreat Leadership Corps.

For his myriad service, he has been honored by Catawba with the Trustee Award, the Algernon Sydney Sullivan Award, and the Professor of the Year Award on four different occasions during his tenure, and the Alpha Chi Award. In 2000, members of Catawba’s senior class created an award named in Ken’s honor: The Kenneth Clapp Tri Delta Award. That award is given annually to a faculty or staff member who exemplifies Ken’s qualities of dedication, devotion and dependability. The United Church of Christ has honored him with its National Excellence in Teaching Award.