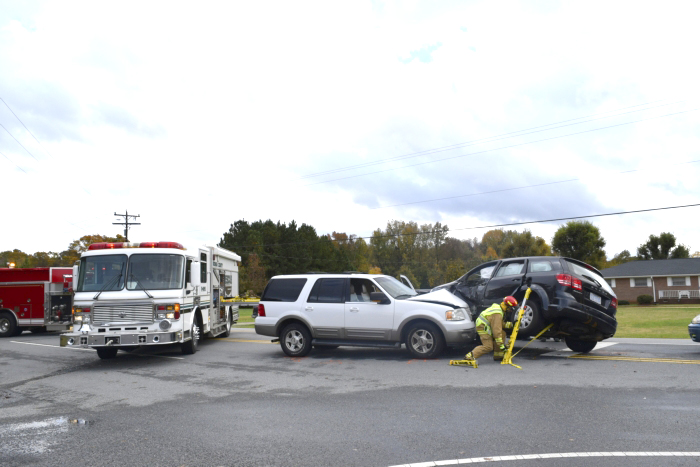 Five people were taken to the hospital after an accident in front of Southeast Middle School today.

The N.C. State Highway Patrol reported that a black SUV driven by Tiana Crosby was making an illegal left hand turn out of the school onto Peeler Road heading towards Old Concord Road when her vehicle was struck on the driver’s side by a white SUV driven by Janice Perry and going in the opposite direction.

A blue Ford Taurus, driven by Betty Oglesby, was waiting in the turn lane to turn left into the school parking lot and suffered damage to the front left fender. Oglesby was unharmed.

The black SUV had four occupants, Crosby and her three children, including a small infant, a Highway Patrol trooper said. The driver of the white SUV was its sole occupant.

Detective Carol Cable, who works as the school resource officer at Southeast Middle, said that the SUV drivers were related. The trooper said he had been unable to confirm that.

Perry, Crosby and the children were taken to Novant Health Rowan Medical Center; their status is unknown.