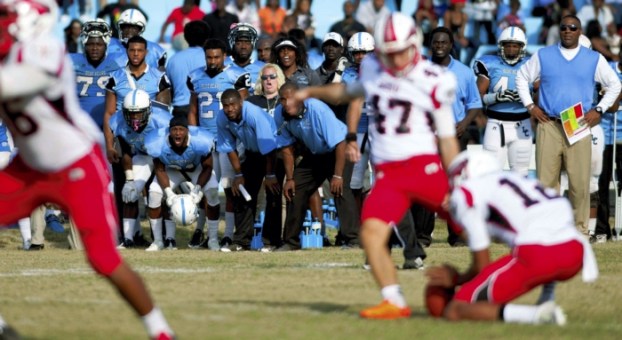 JON C. LAKEY / SALISBURY POST ... The Livingstone sideline watches as Winston-Salem State’s Will Johnson (47) kicks a 25-yard field goal for what turned out to be the winning points last Saturday at Alumni Memorial Stadium. The Rams held on to win the game, 23-21. The Blue Bears host Fayetteville State this week in their Homecoming game at 1:30.

Sting wearing off some for Livingstone

SALISBURY — The best thing about Livingstone having another conference home game this Saturday is that it will help the Blue Bears quickly move on from last week’s heart-breaking loss to Winston-Salem State.

In a game that that was going to put one team or the other into the driver’s seat in the CIAA’s Southern Division, it was Winston-Salem State winning, 23-21, at Alumni Memorial Stadium.

Will Johnson’s 25-yard field goal gave the Rams the two-point advantage and left Livingstone 6:46 to try and regain the lead. The Blue Bears went on a 17-play drive, mainly runs, setting up their own potential game-winning field goal with 20 seconds remaining.

Kicker Leo Manzo’s 32-yard attempt sailed right and the Rams stayed in a first-place division lead, a game ahead of Fayetteville State, Livingstone’s opponent this week.

“Yes, it (the loss) does still sting but we’ve moved on,” said Livingstone head coach Daryl Williams at Monday’s press conference. “We had a good workout on Sunday and the guys were upbeat and excited and ready for this week. They were actually in better spirits on Sunday than I was but once I met with them and we worked out, I felt better by the end of the day — they absolutely lifted my spirits.

“I didn’t know what to expect but everybody was ready to go,” continued Williams. “I was pleasantly surprised in the team’s demeanor. The missed field goal was unfortunate but it’s part of the game sometimes, so we’re ready to move on and get ready for Fayetteville State.”

Williams said that Manzo is tough kid and came out Sunday and did his normal punting. “He never kicks field goals on Sundays, anyway” added Williams. “Leo had his same normal routine and said he’s ready to go this week.”

The loss dropped Livingstone’s overall record to 3-3, but with two games left (both at home), the team’s goal of having the first winning season in 17 years is still a possibility.

It’s Homecoming at Livingstone this weekend and Fayetteville State hopes to crash the party. The Broncos (4-4, 4-1 in the CIAA), have  a lot to play for, as it concludes the regular season on Nov. 7 at Winston-Salem. A win over Livingstone for the Broncos would set up a showdown on Nov. 7, if WSSU, as expected, defeats winless Shaw on Saturday.

Last week’s sudden loss for the Blue Bears was even harder to take considering the valiant comeback they had made. Livingstone found themselves down to WSSU 13-0 and 20-7 before it got the offense going.

A 62-yard scoring pass from quarterback Drew Powell to Arthur Bowden cut the lead to six points and then a long drive ending in a touchdown pass to Jalen Hendricks put the Blue Bears on top, 21-20.

The Rams then drove from their own 17-yard line to get into position for what turned out to be the winning field goal. And adding insult to injury, Johnson missed from 30 yards out, only to get another chance five yards closer, thanks to a running into the kicker penalty.

That penalty was so big,” said Williams. “I told the team on Sunday that even though it was just a little touch, you still have to let the kicker come down and land. The kicker gets to have the time to put both feet on the ground and that didn’t happen. You gotta play by the rules and it cost us.”