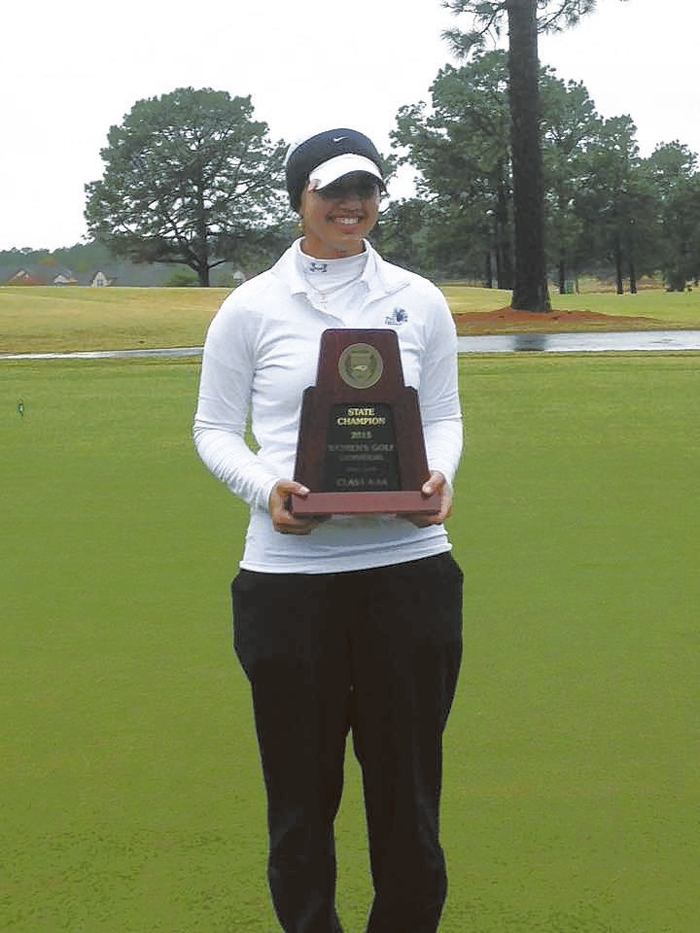 Salisbury’s run as 1A/2A golf team champion finally ended on Tuesday at Longleaf Golf and Country Club in Southern Pines, but SHS senior Grace Yatawara still reigns as the individual state champion.
Yatawara won on the first hole of a playoff Tuesday for her second straight individual title. The East Carolina commit also prevailed at Foxfire as a junior by shooting 72-73 — 145.
Yatawara shot 81 on Monday, a round that was a bit of a struggle by her high standards and included two double-bogeys. One double came on a missed 18-inch putt; the other on a missed 3-footer.
Between the first round and the second, Warrior Golf Club professional Brian Lee fixed the chipping issues Yatawara was experiencing. She’d been hitting behind the ball.
The rest was up to her.
After Monday’s 18 holes, Yatawara was in a three-way tied for second, five shots back of the leader — Belmont Stuart Cramer junior Ellie Porman.
“She shot 76 on the first day in some very difficult wind, so I thought I might have go to out and shoot 72 to even have a chance,” Yatawara said. “I didn’t know if I could win, but I did know that I wanted to be proud of the round that I played. It was my last round for Salisbury, my last round as a high school player, and I just wanted to play it as hard as I could.”
Porman qualified for the state tournament as an individual and teed off earlier than girls such as Yatawara, who were playing as part of qualifying teams.
Tuesday brought rain and cold and even more challenging conditions than Monday. Porman battled her way to an 82 for a two-day total of 158.
Yatawara knew the exact target she was shooting for.
“Oh my goodness, the conditions were tough and I seemed to be lipping out putts the whole tournament,” said Yatawara. who started her day on No. 10. “But I got off to a decent start.”
She was 1-over going to No. 12, a short par 5 at 388 yards, but she birdied it almost routinely, reaching the green in regulation and two-putting.
She played steadily and avoided serious trouble after that, but her next 12 holes included seven pars, five bogeys and a lot of near-miss putts. After she bogeyed No. 6, she knew she couldn’t lose another stroke to par. To tie Porman, she needed to finish with three straight pars.
“All that was going through my mind was to win the next shot,” Yatawara said. “Take it one shot at a time and win that next shot.”
Her pars on No. 7 and No.9 weren’t adventurous, but her par on the 500-yard, par-5 No. 8 hole is one she’ll always remember. It was the key to her championship.
After two shots, she was still 128 yards short of the pin. Her approach was uphill, so she estimated she needed to hit 140.
But then she hammered the ball 170.
“Just all the adrenaline, I guess,” Yatawara said with a laugh. “I flew over the green by 30 yards.”
She got up and down from there, knocking a perfect chip within 3 feet — a championship shot. Then she made a difficult putt under considerable pressure.
“That was a hard 3-footer, a little downhill slider,” Yatawara said. “But I made it.”
Yatawara shot 77 for a two-round total of 158. She was the only player to break 80 on Tuesday.
Her playoff with Porman was held on No. 1. Yatawara parred, while Porman bogeyed. That was a hole Yatawara had bogeyed and double-bogeyed previously, but this time she made a routine par 4.
•••
Croatan shot 272-265 — 537 to win the 1A/2A team title.
First-round co-leaders West Davidson (541) and Gray Stone (549) finished second and third, respectively. Hendersonville (551) placed fourth. Salisbury, which has won four straight championships, finished fifth at 571.
Salisbury’s Shelby Holden shot 98-107 — 205. Caroline Parrott shot 102-106 – 208. Holden was 49th, while Parrott tied for 53rd in the 78-player field.
Parrott made two pars on Tuesday, while Holden had one.
“I was proud to have them as my teammates, and they did their best,” Yatawara said. “It was their last round for Salisbury. They didn’t hold anything back.”
Micah Mason led Gray Stone. She shot 85-83 — 168 and tied for fifth.
Rachael Mast shot 84-90 — 174 to lead West Davidson. She placed 15th.
•••
In the 3A Championships at Foxfire, Carson junior Micah Furr shot 89-87 — 176 and finished 27th.
Furr made two birdies and six pars on Tuesday to help make up for a “9” on her first hole.
Furr shot 181 in the 3A State Championships a year ago.
Carson senior Adison Collins shot 98-109 — 207 and tied for 67th in a field of 78. Collins had a birdie and two pars on Tuesday.
Cox Mill’s Jaime Cassell shot 80-83 — 163 for 10th place.
Rockingham County shot 254-256 — 510 for the team championship. Lee County and Fayetteville Terry Sanford shot 516s to tie for second.