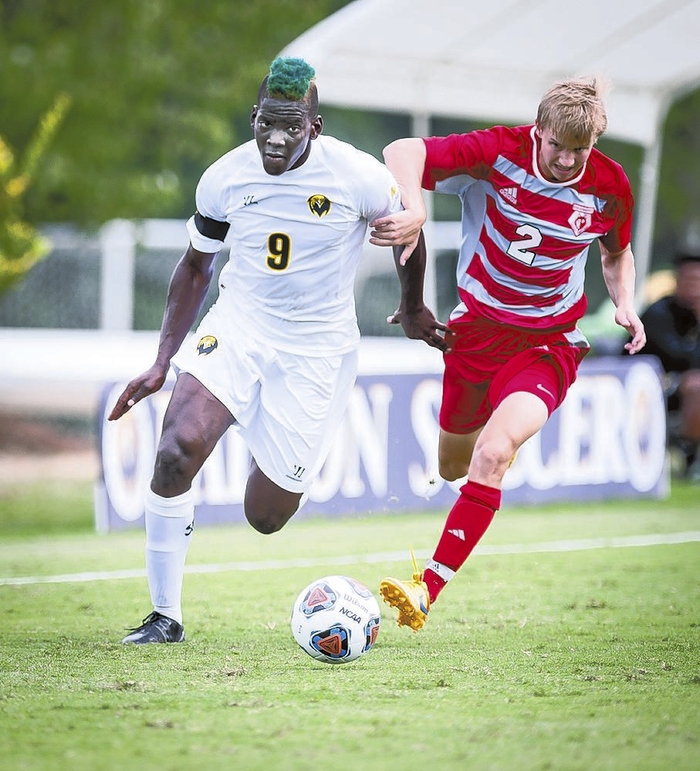 MISENHEIMER – The No. 1-ranked Pfeiffer University men’s soccer team will head up U.S. 52 for a non-conference clash at Catawba College, as the Falcons look to push their regular season winning streak to 21 straight. The Falcons and Indians will kick off tonight at 7:30 at Frock Field.

possession of first place in Conference Carolinas. So far this year, the Falcons are the only NCAA Division II program that has no losses or ties on their ledger. Pfeiffer’s 52 goals on the season ranks them fourth in the country, while their 3.47 goals per game is the nation’s fifth best.

Not only is Pfeiffer getting it done on the offensive side of the ball, but their defense has been stingy as

well. In their 15 matches, the Falcons have allowed 0.59 goals per game which is tied for seventh best in

the nation and have allowed just two scores over their past eight contests. With their nine shutouts, the

Falcons are tied for fifth in the nation with a shutout percentage of 60 percent.

Leading the way is junior forward Nathan Regis, who is a two-time Conference Carolinas Player of the

Week and was once named NSCAA National Player of the Week. In the Falcons’ 3-0 shutout at King on

Saturday, Regis netted all three of Pfeiffer’s goals and tied the all-time Pfeiffer record for most career

goals with 49. Regis comes into the match tied for first in Division II with 20 goals and second with 44

total points and is just one score shy of breaking a 37-year old record. His 1.33 goals per game is the

Bob Reasso is in his third year guiding the Pfeiffer men’s soccer program. In his first season, Reasso guided the Falcons to a nine-win improvement as the Falcons finished 2013 with a record of 10-8-2 and took top-seeded Erskine to a shootout in the Conference Carolinas Tournament semifinal. In 2014, Reasso’s Falcons set the school record for most wins in a season as they ended the campaign with a 17-5-1 mark and captured the Conference Carolinas Tournament title with a win in penalty kicks over Lees-McRae.

That win sent Pfeiffer to its first ever NCAA Tournament where the Falcons topped USC-Aiken, 3-1. Reasso, who was head men’s soccer coach at Rutgers for 29 years, has a remarkable 407-207-79 career record. The Falcons defeated Tusculum, 3-0, on Sept. 30, for Reasso’s 400th career win.

Reasso posted a winning record at Rutgers in each of his first 23 seasons, and took his program to the NCAA Tournament 13 times. In 1990, Reasso led the Scarlet Knights to the NCAA Championship game before falling to UCLA in penalty kicks. That season, Reasso was named the National Coach of the Year.

Reasso is also athletic director/vice president for athletics at Pfeiffer.

The Indians, coached by Ken Hassler, are 5-9 this season but are coming off of a 2-1 South Atlantic Conference win over Tusculum on Saturday, taking the match in overtime. Jack Ragan scored the game winner in the 100th minute to end a five-game losing skid. Tonight will mark Catawba’s third match against a Conference Carolinas opponent as the Indians defeated Belmont Abbey on Sept. 12 and fell to Barton a week earlier.

Since 1998, the Falcons and the Indians have played 13 times with Catawba winning seven of those matches.