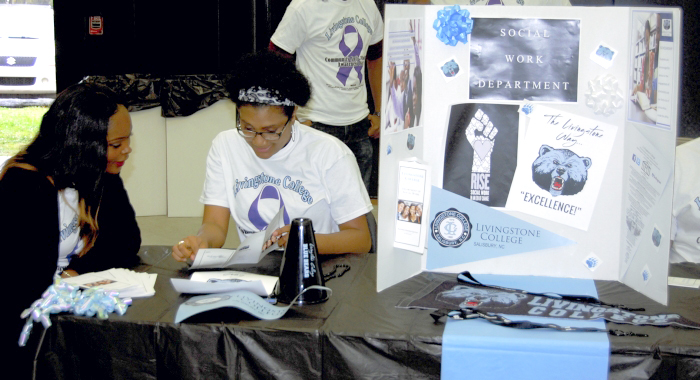 Community members and students want the larger community to know that they are against violence in the community.

Brown said he was excited to take part in the event.

“When Dr. Godwin brought it to us, I thought it would be a perfect opportunity because that’s one of our initiatives, and we really believe in empowering the students,” he said.

Godwin said it was the students who really came up with the idea of having this event.

“The students were in a research methods class identifying social issues and they were saying that a big issue in our community is violence,” she said, wearing a t-shirt with a purple domestic violence awareness ribbon on the front.

Alvin Reynolds, a social work department student, said the event was about taking a stand with the community.

“We’re doing this event to let the community know that we’re not for violence, we’re against it. We’re trying to stop the violence, not just in Salisbury, but around the world as well,” Reynolds said.

There were speeches given by students and community members, including Livingstone Campus Police Chief Gloria Blaire and East Spencer Police Chief Sharon Hovis.

Blaire said the event is important to her as a community member.

Hovis said she wanted to help students remember to be vigilant and aware of the world around them.

“It is … giving some insight to the college students and anybody who lives in the community … and making them vigilant to the activities that’s going on around them,” she said.

Godwin said the students went around in the community and asked different organizations for support.

Organizations like Susan G. Komen Charlotte, Heal Our People Incorporated, the Black Lives Matter Campaign, campus Greek organizations and others had tables set up around the gym with information for attendees.

There was a moment of silence and purple balloons released for those affected or lost as a result of domestic violence.

Godwin said it is important for students to know the resources available in the community, and that there are people who are looking out for their safety.

“We don’t tolerate violence and we’re not going to do it,” she said.