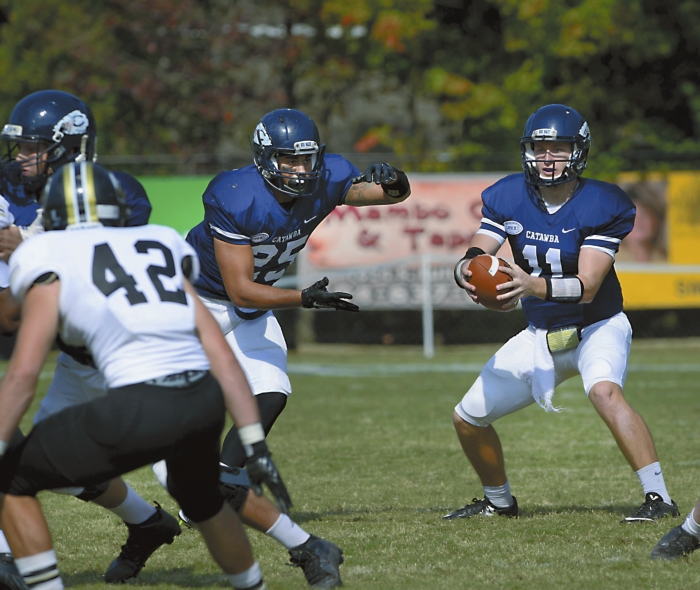 photo by Wayne Hinshaw/for the Salisbury Post... Catawba quarterback Mike Sheehan (11) reads the defense before handing the ball off to running back Cary Littlejohn (25), during last Saturday’s game against UNC-Pembroke at Shuford Stadium. Catawba defeated the Braves, 39-21.

SALISBURY — Maybe the last thing Catawba’s Hunter Lee ever dreamed of doing was sacking his friend Patrick O’Brien in a college game.
But it happened Saturday at Shuford Stadium.
Lee and O’Brien, both 6-foot-4 and both business majors, played on the same side of the ball at Mooresville High. Lee was a tight end, while O’Brien was the star quarterback.
In 2010, when Lee was a junior and O’Brien was a senior, Catawba grad Hal Capps arrived to coach the Blue Devils after compiling a legendary career at Western Alamance High.
Mooresville had been 0-11 in 2009, but Capps guided the Blue Devils to an 8-4 record in his first year, and O’Brien threw for 2,100 yards and was conference player of the year.
“Coach Capps made football a lot of fun, and it was fun to practice as well as play the games,” Lee said.
As a senior in 2011, Lee was part of the Mooresville squad that ended West Rowan’s 46-game winning streak, the nation’s longest at the time.
“The West Rowan games were always fun, always exciting,” Lee said.
O’Brien originally went to UNC Pembroke, but then he transferred to Charlotte. He was part of the start-up program’s redshirt class in 2012 and he played in four games in 2013, including the 49ers’ historic football debut against Campbell.
Then O’Brien transferred back to UNC Pembroke. He’s moved into the starting role this season as a junior, and he’s been very good, completing 59 percent of his passes for 1,473 yards and 10 touchdowns.
Lee’s career at Catawba as a backup tight end has been quieter. He redshirted in 2012. In 2013 and 2014, he played in a total of 14 games, mostly on special teams.
“He wasn’t playing much at tight end,” Catawba head coach Curtis Walker said. “But he was helping up on the developmental squad. He had a lot of energy, a lot of passion and he had this fire about him. We have meetings to talk about ways to improve the team, and we decided he might help us more on defense.”
The idea surprised Lee at first, but it made sense. Everyone wants to get on the field as much as possible, and so the 215-pounder began a transition to defensive end last spring.
“I wanted to try it,” Lee said. “As it turned out, I fell in love with it.”
Now Lee is listed as a second-team defensive end, working behind veteran C.J. Barksdale. Lee has played in every game and got in on his first tackle against Davidson.
When UNC Pembroke lost, 39-21, to Catawba on Saturday, O’Brien had a terrific game for the Braves, completing 27 of 45 passes for 396 yards and three touchdowns.
In the final minutes, UNC Pembroke had a chance to score again and had first-and-10 at the Catawba 37.
Lee was in the game, he rushed off the edge, and suddenly he saw O’Brien right in front of him.
“It went through my mind, ‘Wait a minute, can this really be happening?’,” Lee said with laugh. “Then I got the sack. It blew my mind that Patrick was my first sack. He’s hard to sack. He gets rid of the ball so quickly.”
But it happened. Lee’s 5-yard sack is officially in the books, and now he’s looking forward to sack No. 2.
He’s hopeful that next time it won’t be a former teammate.
“It’s not like we were best friends and hung out all the time or anything, but we were friends,” Lee said. “We had a chance to talk on the field after the game.”
The sack definitely came up in the conversation.