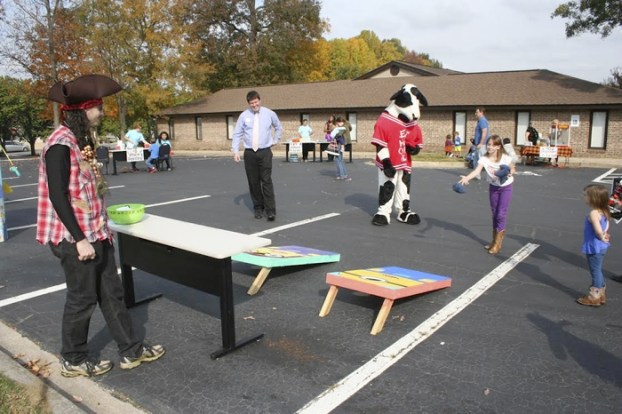 Saturday was a perfect fall day — sunny and just a touch brisk — and a perfect day for the Fall Festival sponsored by Smart Start Rowan.

Ten stations ringed the agency’s parking lot. Just over a year ago, Smart Start Rowan moved to its new location at 1329 S. Jake Alexander Blvd., and staff took full advantage of the expanded space for this community event.

Children could choose from among six games — including corn hole, ring toss, archery, and the like — paint a pumpkin, have their faces painted, and make a balloon yo-yo.

“We are glad to have them,” said Smart Start’s Mary Burridge, who coordinated the event, which ran from 10 a.m. to noon.

“All of the credit for these games goes to Mary,” Munoz said with a wide smile. “She put everything together, and it just looks awesome.”

Munoz said that many of the families from Smart Start’s Parents as Teachers program were in attendance, but the festival was open to the community. Smart Start serves children in Rowan County from birth to age 5.

Gabriel Webster, 5, got help at the archery station from Early College volunteer Courtney Bogle. Smart Start’s Tracey Webb-Goodman explained how her husband, Dwayne Goodman, worked to make an archery set that was child-friendly yet child-safe. A covered sock was situated at the top of the arrow, assuring a safe landing through the target a few feet away.

Gabriel then moved on to the Minion-theme corn hole toss, staffed by Smart Start’s Tim Campbell in pirate attire. His sister, Adelaide, 1, had some help in dropping the bags through the holes. She made it a time or two.

The Chick-Fil-A cow also tried its hand — hooves? — at corn hole, and faced some stiff competition from Aubrey Barron, 10, and her sister Ember, 5.

“They live right here so we came by,” said Teresa Beaver, the girls’ grandmother.

“The cow’s been practicing,” noted Dustin Wilson, Chick-Fil-A’s marketing director, who tossed the bags a few times as well.

Across the parking lot, Lenny Medina was having a symbol painted on his hand to match his costume. He was dressed as Goku, the main character in Dragonball Z, a popular Japanese cartoon. He was there with his aunt, Erandi Rodriguez, whose sister works for Smart Start.

“This is fun!” Rodriguez said.

Orion Annand, 3, was fascinated with his balloon yo-yo. His mom, Leilani, brings him and his little sister, Soleil, 19 months, to Smart Start Rowan often. She enjoys hanging out there with other moms and their kids.

“It’s a great place,” Annand said. “It’s calm and peaceful. The staff is great, and I love the selection of books.”

It’s also a great place to have a fall festival.

Chili cook-off a success for Waterworks