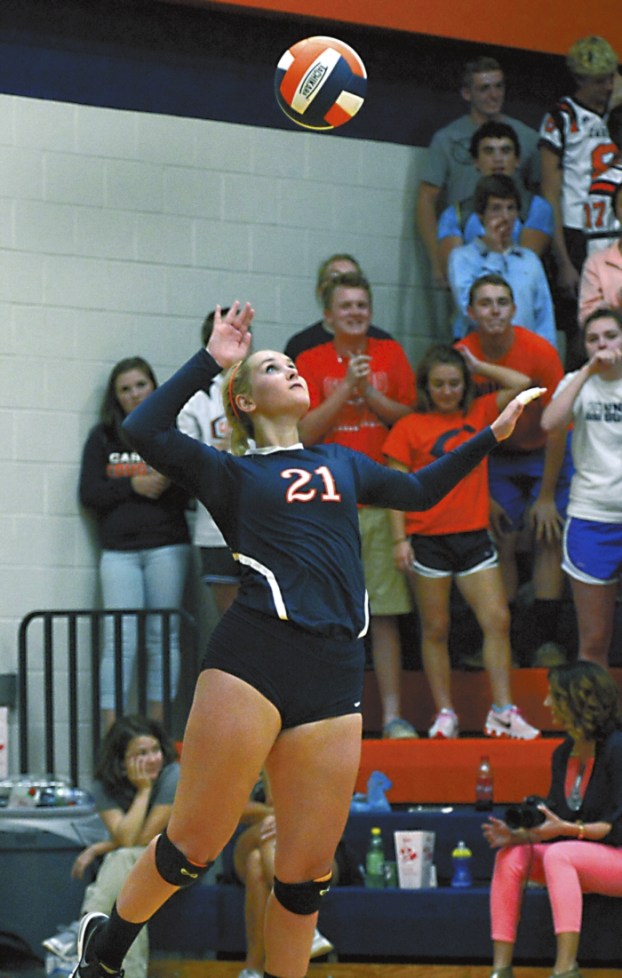 CHINA GROVE — Hickory Ridge coach Patti Chason believes her team was good enough to win some 3A leagues.
Unfortunately, the Ragin’ Bulls play in the South Piedmont Conference with Carson and Cox Mill, so they finished third.
“And we had to win a lot of four-set and five-set matches and fight like crazy to get third,” Chason said. “It’s a good league. Six teams making the playoffs says a lot.”
Hickory Ridge’s season ended in the Carson gym on Tuesday in a second-round 3A playoff match. The Bulls (17-9) rely on four sophomores, while the Cougars have experienced players, including some who have been on the big stage in state-championship matches. Experience was the difference, as the Cougars (27-2) took care of the Bulls for the third time.
“We’ve got two great teams in our league,” Chason said. “Cox Mill has power. Carson runs a faster offense than anyone else. Even playing them for the third time, we couldn’t get used to their tempo.”
Carson didn’t play its best — or its worst — in a 25-19, 25-14 and 25-14 victory.
Mostly, the Cougars just calmly grinded it out in front of a decent crowd, turning it on when they needed to turn it on or whenever coach Kelan Rogers reminded them they needed to turn it on.
“I thought we played well enough to win,” Rogers said. “Playing Hickory Ridge for the third time, it was almost like we knew exactly how well we needed to play and exactly how much energy we needed to use.”
Juniors Elena Turnbull and McKenna Moose are the Cougars who had exceptional days.
“I’ve been sitting a lot,” Moose said. “I needed a good day.”
She had one.
It was Turnbull who got the Cougars going after they started slowly. Carson was down, 9-8, when a flurry of Turnbull kills transformed the deficit into a comfortable 18-10 lead. Carson ended that set impressively — with a kill by sophomore middle hitter Lindsay Elmore, two more by Turnbull and one by Moose.
“We tend to start slow, but we usually catch up,” senior back-row player Sarah Boyd said with a smile.
In the second set, Carson got an early spark from a diving, rolling dig by Boyd and broke on top 5-0 on Turnbull’s strong serves.
Hickory Ridge was never able to curb Carson’s momentum, and a combo block by Elmore and Moose clinched the middle set.
Hickory Ridge made its strongest push at the start of the third set and grabbed a 3-0 lead. Rogers, sensing potential trouble and not thrilled with the first lazy point of the day, called a quick timeout.
“That set didn’t start out great,” Rogers said. “I didn’t want 3-0 to turn into 6-0.”
It didn’t.
The Cougars got even at 4-all on a kill by Kaytee Leonguerrero. A nice dig by steady senior libero Jordan Osborne and a whistling kill down the line by springy freshman Mallory Weast gave Carson its first lead of the set at 8-7.
With Carson up, 10-9, a reversed call in Carson’s favor appeared to be correct, but it took some wind out of the visitors. After a couple of quick kills by Elmore and a few smart plays by setter Morgan Hester, Carson started pulling away. Turnbull’s final kill of a 15-kill day made it 21-13. Turnbull ended it with an ace, one of the few that Hickory Ridge allowed.
“It was a good game,” Turnbull said. “Hickory Ridge had a lot of energy today, but we were able to bring ours up after some slow starts.”
Cox Mill (27-2, with both losses to Carson) survived a five-set match with St. Stephens and also moved forward on Tuesday.
Things will get more challenging for Carson on Thursday when it entertains North Iredell (17-5), an old rival from the Cougars’ days in the North Piedmont Conference.
“We’re excited about every match and we don’t want to lose,” Carson senior Kristen Cauble said. “We want to get back to states (Carson was there in 2012 and 2013) and we think we can do it. We just have to get our heads right and play our hearts out.”

CHARLOTTE – The Carolina Panthers are on a roll and football fans are scrambling to buy tickets for the big... read more