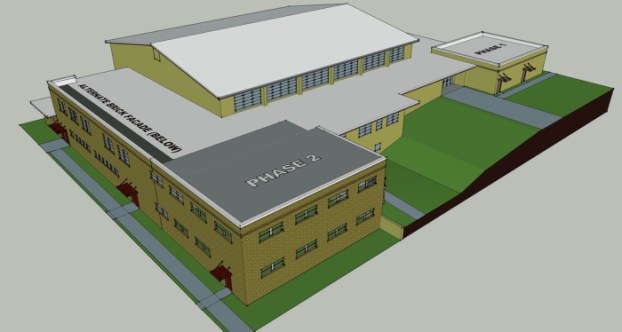 Salisbury is buzzing with a new campaign to help Salisbury High School.

The capital campaign, named “Catch the Buzz,” was announced at the Salisbury High School homecoming football game and aims to raise $1 million to upgrade the high school’s gymnasium.

Phase II of the Gym Enhancement Project and “Catch the Buzz” campaign are under the Salisbury High School Athletic Boosters Club, but lead by a separate board of directors, according to a recent press release.

The current gym was built in the mid-1950s. Luke Brown, principal of Salisbury High, said the renovations will bring the space into the 21st century.

“It gives us some 21st century tools in those classrooms, which right now, under the structure of a 60-year-old building, we would not have access to,” Brown said.

According to the SHS gym project website, a two-story, two-room addition will be attached to the southwest corner of the gym.

During the day, the multipurpose room planned for the top floor will be designated for dance classes primarily, but aerobic and adaptive physical education classes will be able to use the room as well. After school, the room is a good place for the wrestling team to practice, as well as cheerleaders, the dance team and other teams.

The bottom floor will provide a safer and larger weight room for physical education and JROTC classes. Athletic teams will also be able to use the room after school.

“Right now, we have 20 or 30 kids working in our small, little workout area,” Brown said.

The campaign will add more indoor and outdoor security cameras, as well as air conditioning and acoustical panels in the gym’s court area.

There are also plans to expand an exterior wall in the gym to create either one large or two medium-sized Health Science classrooms.

Brown said the different classes the gym will be able to hold will enhance the students’ learning experiences.

“We’ll be tying in the mind, body and soul piece to education, which is very, very important,” Brown said.

Windsor Eagle, former principal of Salisbury High, is the chairman of the project’s board of directors.

Brown, who is also a member of the board, said he is grateful for Eagle’s continued support of the school.

“I’m just proud to be able to partner with Windsor on this and am thankful to him for heading the campaign up and for continuing to be a major part of what we do at Salisbury High School,” Brown said.

Eagle said that not only will the students of Salisbury High benefit from the renovated building, but community members will, as well.

“It’s just a community building, is what it actually is, and it’s going to serve for years to come,” Eagle said.

Eagle said there is a Salisbury High class competition to help raise funds, and the board has also reached out to former athletes and other alumni.

“I’m looking forward to people wanting to get involved in this project for their students or grandchildren,” he said.

Ronnie Smith, a board member, said he wanted to help give students what he had back in high school.

“I want to provide the best facilities possible to our students today and in the future so that they will have some of the same opportunities we had years ago,” Smith said.

According to the project’s website, the board hopes to have the air conditioning and acoustical panels installed by the start of the 2016-2017 school year.

“We are all excited about the future of Salisbury High School and what it will mean to this community,” Smith said.