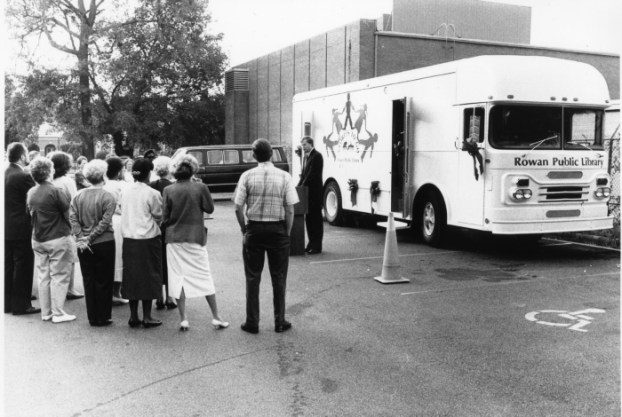 Yesterday: In 1991, bookmobile gets back on the road

In this Salisbury Post file photo, Chip Short, chairman of the Rowan Public Library Board of Trustees, addresses a crowd of about 35 people behind the main library on the morning of Sept. 23, 1991, when the library celebrated its refurbished bookmobile’s getting back on the road again. The bookmobile was taken out of service in October 1990 with the promise it would return, but with a new purpose. The former bookmobile service, which had begun in the late 1930s, offered a library on wheels to the general public in Rowan’s rural areas. When the new “Stories to Go” bookmobile debuted in 1991, it was meant for children, 3 to 5, who were attending daycare centers, Head Start programs and preschools. The bookmobile hit the road later that day and was already lined up to serve 34 different locations and about 1,000 children monthly. Its overhaul cost about $7,500 and  included new carpet, interior carpentry, a new logo, engine repairs and painting. At the time, Rowan Public Library Director Phil Barton said the Stories to Go program for preschoolers was the first of its kind in North Carolina, and its focus was to address illiteracy and get books in the hands of children to instill a love of reading. Library employees Helen Peacock and Pam Norwood manned the bookmobile.

Yesterday: In 1944, when Harry Welch Sr. slugged it out with Joe Louis

This is a photograph the Post has published before, but it’s worth repeating. Wayne Kennerly saw it recently at breakfast when... read more