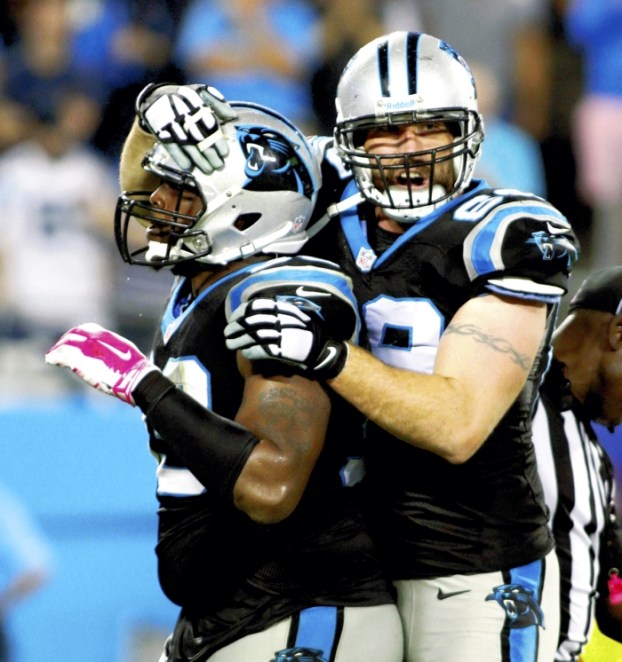 Carolina Panthers' Jared Allen, right, celebrates with Kawann Short, left, after a sack against the Philadelphia Eagles in the second half of an NFL football game in Charlotte, N.C., Sunday, Oct. 25, 2015. (AP Photo/Bob Leverone)

CHARLOTTE (AP) — Cam Newton took another step toward rewriting the NFL record book, and the Carolina Panthers defeated the Philadelphia Eagles 27-16 on Monday night to improve to 6-0 for the first time in franchise history.

Newton threw for a touchdown and ran for another score, marking the fourth time this season he has accomplished that feat in a game and 28th time in his career — three behind Hall of Famer Steve Young for the league record.

Jonathan Stewart ran for 119 yards and Mike Tolbert scored two touchdowns for Carolina, which has won a franchise-record 10 straight regular-season games dating to last season. The Panthers are also one of five unbeaten teams remaining in the NFL, joining New England, Cincinnati, Denver and Green Bay.

Ryan Mathews ran for 97 yards, including a 63-yard touchdown, but the Eagles (3-4) were only able to convert three interceptions by Newton into six points.

The Panthers held Sam Bradford to 205 yards passing and sacked him five times, including twice by Jared Allen.

Newton finished 14 of 24 for 197 yards. He had three picks, but two of them hit his wide receivers in the hands.

Last November, the Panthers turned the ball over on two of their first three plays in an embarrassing 45-21 loss to the Eagles on Monday Night Football. They seemed determined to start this prime-time game a little better.

Stewart ran twice for 45 yards on Carolina’s first two plays from scrimmage, Newton zipped a pass to Philly Brown for 25 yards and Tolbert scored on the fourth play of the drive on a 2-yard run for a quick 7-0 lead.

The Panthers pushed the lead to 14-3 when Newton reached the ball across the goal line for a 2-yard score. It was his fourth rushing touchdown of the season. Young totaled 43 career rushing touchdowns over 15 seasons. Newton has 37 just six games into his fifth season.

Tolbert pushed the lead to 21-6 when he caught a pass in the flat, bounced off a hit from Malcolm Jenkins and carried four Eagles into the end zone with him for a 2-yard TD reception.

But the Eagles wouldn’t go away.

Mathews’ 63-yard burst up the middle quieted the crowd, and cornerback Byron Maxwell intercepted Newton on a ball that deflected off the hands of Devin Funchess leading to a field goal by the Eagles.

Trailing 24-16, the Eagles had one last chance to tie and send it into overtime, but Allen came up with two sacks and a tipped pass on the crucial series with less than three minutes to play. Allen now has 136 career sacks, more than any active player in the league.

Eagles seven-time Pro Bowl left tackle Jason Peters was carted off the field in the first quarter with back spasms after he fell to the ground while trying to block Allen.