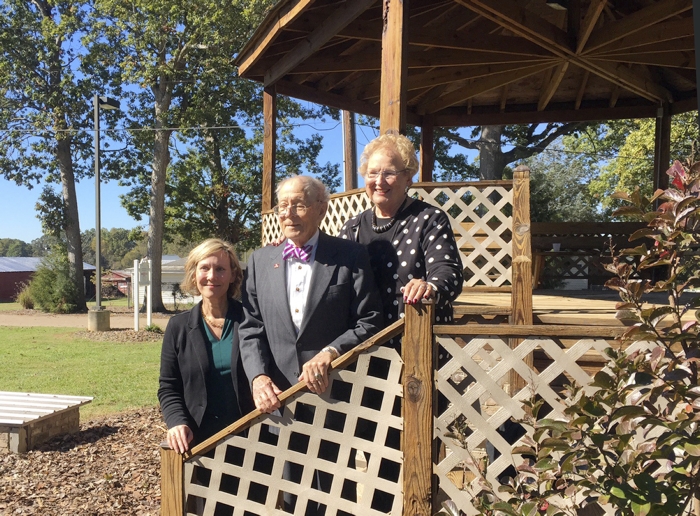 Submitted photo Marcus B. Crotts and his wife, Margo Jackson Crotts, at Wednesday's dedication ceremony for the gazebo at Nazareth Children's Home.

ROCKWELL — A Winston-Salem couple has made a major gift to Nazareth Children’s Home, naming the campus gazebo in memory of their son.

A private dedication ceremony was held Wednesday, following the quarterly Board of Trustees meeting, naming the brick gazebo in memory of Van Jackson Crotts, with a bronze plaque memorializing the late businessman.

Marcus B. Crotts and his wife, Margo Jackson Crotts, made their gift to the RYE Foundation, designating it “to provide a place of healing and hope for the children of Nazareth,” according to a press release.

A graduate of North Carolina State University who also earned an MBA from Wake Forest University, Van Jackson Crotts served as president of Crotts and Saunders Engineering of Winston-Salem. He was also an Eagle Scout.

Van Jackson Crotts died earlier this year at the age of 56.

“This wonderful gift from Mr. & Mrs. Crotts will be a lasting memorial to their son, Van,” said Josh Regan, Nazareth’s Director of Development. “We believe the gazebo will be a gathering place for all of the special children we serve at Nazareth.”

“Marcus and Margo have always been loyal and liberal supporters of Nazareth, with Marcus serving as a trustee for many years,” said Vernon L. Walters, president and CEO of Nazareth Children’s Home.

At present, Nazareth is home to 52 boys and girls, who are housed in family-style cottages. Residents attend weekly worship services and are enrolled both in public schools and Crescent Academy, the home’s on-campus school.