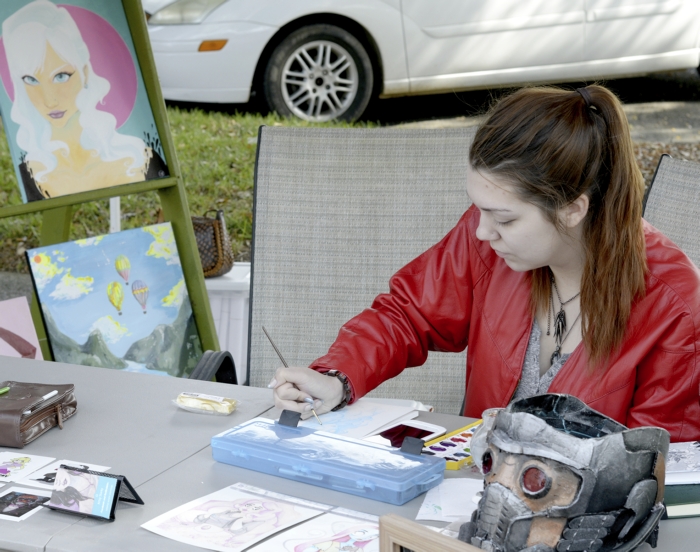 That’s not counting the witches, spooks, pirates, zombies and superheroes who came dressed in costumes to give or receive candy at the Halloweeen-themed event.

Staff estimated turnout at over 1,000. Many vendors and shoppers stayed well past the official 4 p.m. ending time.

“It’s been like this all day,” said organizer Michael Knox of Kannapolis Arts, as he navigated a crowd of people browsing artwork. “And the candy has been going fast.”

Kannapolis Arts, a division of Downtown Kannapolis, Inc., produces the Kaleidoscope festivals, along with Modern Film Fest screenings and other special events.

Saturday’s event was the fifth Kaleidoscope festival of 2015 and the last of this year’s series.

Several Kaleidoscope vendors said they see the festival as a chance to gain exposure and promote doing what they love.

Monee Dwiggins said she started making jewelry earlier this year, partly as a way to work through a difficult time in her life.

Saturday, she dressed in a Renaissance-inspired dress and jewelry of her own design to promote her new business, Lady M Designs.

“I figured this was the best time to debut my work,” said Dwiggins, who lives in Kannapolis. “I wanted to see what the public would say. “

By the end of the afternoon, Dwiggins said she’d sold much of what she had put on display and had to get out more pieces.

“It has been great. I got a lot of positive feedback,” Dwiggins said. “I’m definitely making plans to come back.”

At her booth on the next block, Carson High graduate Jessica Stark worked on a watercolor painting she said was inspired by Tim Burton’s movie “Corpse Bride.”

She also had larger paintings on display, “but watercolors are smaller and faster. They’re fun,” Stark said.

Dressed as Star-Lord from the Marvel Comics film “Guardians of the Galaxy,” Stark said showing her art at Kaleidoscope “is a confidence boost.”

“Every once in a while you start to get down, and then you come here and people say, ‘Oh, I love your stuff!'” Stark said.

Michael Hutchens, of Rockwell, said getting space in a gallery to show his art – a mixture of oil paintings and digitally-created art – had been tough.

His booth at Kaleidoscope was a mini-exhibition of his artwork, starting with images of friends and family and going through his more recent work. Hutchens said his paintings have a wide range of inspirations, from 1940s pin-ups and movies to real-life events and people.

Hutchens said Kaleidoscope had helped him get more exposure than he’d found through the Internet.

“I love meeting all the people, getting my work out for people to see it,” Hutchens said. “I’m glad to have a venue where there’s an opportunity to interact with people and discuss my art.”

The growth of Kaleidoscope and other events is a positive sign for Kannapolis, Knox said.

The city has just begun a multi-million-dollar redevelopment of downtown property purchased from David Murdock, who developed the downtown N.C. Research Campus.

With that redevelopment, Knox said, comes the potential for Kannapolis to become an arts and culture destination.

“Kannapolis is going to be in a position to attract businesses that support what Kaleidoscope is all about,” Knox said.

In the meantime, Knox said Kannapolis Arts is working to create a community that brings local artists together.

“I’ve seen so many collaborations come about as a result of this,” Knox said.