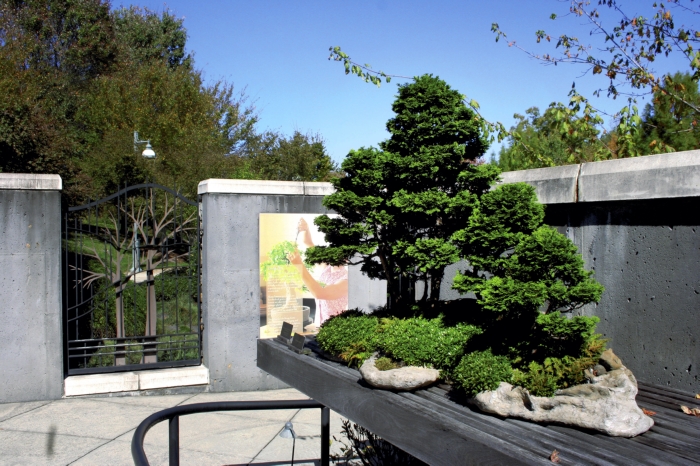 Some arrangements seem to echo the trees surrounding them. Photo by Susan Shinn, for the Salisbury Post.

ASHEVILLE — The Bonsai Exhibition Garden of the North Carolina Arboretum is an engaging, pleasant surprise tucked among the arboretum’s nine other outdoor areas.

My son, Andrew, and I had the opportunity to explore the bonsai garden during his fall break. It’s a beautifully landscaped area, marrying a unique design that compliments the large number of bonsai on display. It’s a place that invites quiet contemplation among these unique plants.

The sign that welcomes visitors reads, “When you enter here, become small. Open your mind to the possibility that the greatest mysteries of life can be found in a single, tiny leaf.”

According to the information panels we read throughout the garden, bonsai was originally introduced in China. It is the art of growing dwarfed, ornamentally shaped trees or shrubs in small containers. This unusual art form spread to Japan around 1195, and the Japanese introduced it to the world at the Paris exhibition in 1900.

Indeed, Japanese-style bridges connect one part of the exhibit with another, creating the feel of a Japanese garden.

While bonsai are prized for their great age, age is not a factor in the bonsai on display here. Rather, emphasis is placed on the health and overall appearance of each plant, as well as its artistic design and botanical interest.

In addition, the exhibit blends the ancient art of bonsai with the flavor of Southern Appalachia. The small containers hold species native to the region, including juniper, crape myrtle, white pine and more. Titles are also indicative of place: “Mount Mitchell” and “Roan Mountain” are among the clever names we read.

As we exited the garden after a relaxing visit, we saw another sign, a quote from Arthur Joura, a bonsai curator: “The world of bonsai is miniature, but the natural world that it evokes is boundless.”

The bonsai will be displayed until mid-November, returning to the garden in mid-March. The garden displays 50 bonsai at a time, and the plants are periodically rotated. The entire collection will be showcased on World Bonsai Day, the second Saturday in May.

The arboretum is located at 100 Frederick Law Olmsted Way in Asheville. For more information on the North Carolina Arboretum, call 828-665-2492, or visit www.ncarboreum.org.