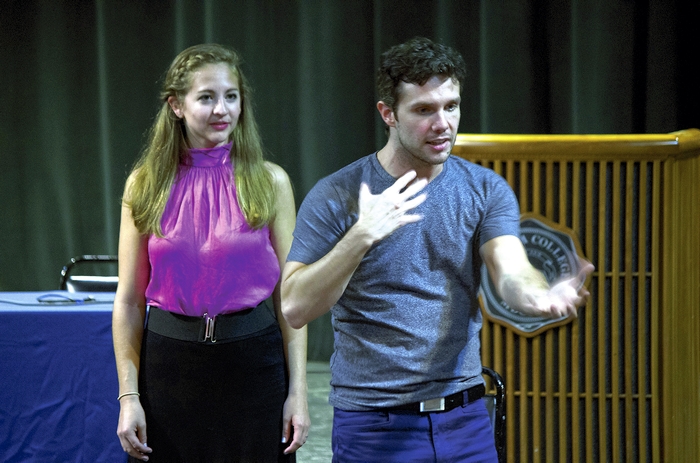 For two weeks in October, professional actor Anthony Johnson ’05 returned to his alma mater to share his professional experience in classes with Catawba theatre arts students.  Although it had been 10 years since he graduated, Johnson, serving as a guest performing artist, said, “I saw myself and my former classmates in those students.”

“It was a full circle moment to step back in and share what I’ve learned.  It was a really beautiful experience and one that was on my secret bucket list,” he explained. “Even though I graduated 10 years ago and even though things at Catawba have evolved and changed, it feels the same here.  Catawba has a vibe that continues.”

Johnson graduated with a B.F.A. after majoring in musical theatre and minoring in dance.  A member of Actors Equity Association, he has lived in New York City for the past seven years.  He has performed extensively across the U.S. and abroad.  His credits include the national tour of “Hairspray” (IQ); the off-Broadway production of “The Bully” (Ted), and “The Blue Lagoon: A Musical” (Richard) with NY Artists Alliance; regional productions including “Pippin” (Pippin) at Phoenix Theatre, “West Side Story” (Tony) at Westchester Broadway Theatre, “Gypsy (Tulsa) at Harbor Lights Theatre Company, “West Side Story” (A-Rab) at Riverside Theatre, “Grease” (Sonny/Danny Zuko u/s) at North Shore Music Theatre, and “Hairspray” (Swing) and “A Funny Thing Happened on the Way to the Forum” (Protean u/s) at Paper Mill Playhouse.  Johnson is also the founding artistic director of Mondays Dark Theatre Company, established in 2011 with Broadway producers Rob Hinderliter and Dominick LaRuffa Jr.  When he is not acting, he works in arts administration for two off-Broadway theatre companies.

During a “Preparing for Your Professional Career” session that Johnson conducted with students on Oct. 14, he emphasized the importance of both trying and failing.  As various students took to the stage in Hedrick Little Theatre to perform prepared monologues designed to showcase their acting, and sometimes musical talent, Johnson provided feedback and constructive criticism.

“An audition is never a question of talent,” Johnson explained to those gathered.  “It’s about what you can do.  Never ask for their permission – walk in and show them what you can bring to the table.  Go be you.  Never apologize for who you are.

“Never be afraid that it’s not enough.  You do have what it takes, and you just have to tap into that.”

Johnson said that he loves to travel and loves to explore “the world we live in and meet new people so I’m not always trapped in my own little world.”

“I love to see how other people live and put that into the work I do.”