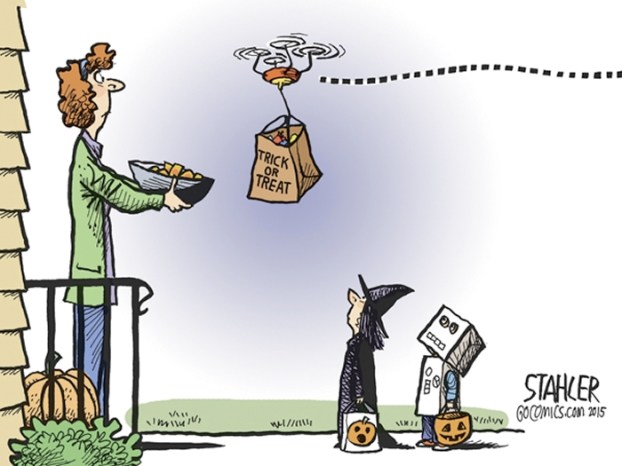 Sharon Randall: This nana is no fan of Halloween costumes I especially like not spending hours decorating or shopping for gifts or cooking, unless you count buying candy, which I do.

OK, maybe Halloween is my favorite holiday. But I never liked it when I was a child.

I’ve told some of this story before. If it sounds familiar, bear with me. I promise a different ending.

We lived out in the country. Our closest neighbors weren’t close. But the Halloween I was 10, my mother said I could take my brothers trick-or-treating. Joe was 6, blind and afflicted by cerebral palsy that made him walk like Frankenstein. Denton (I called him “Monkey Boy,” a term of endearment and description) was barely 5.

Costumes were limited. I folded a tin-foil crown and stuck it on my head. Looking in the mirror, I thought of what my grandmother might say: You can put lipstick on a pig, but it’s still a pig. I was no princess. I didn’t know who I was or what I wanted to be. But a tin-foil crown would have to do until the real thing came along.

I threw a sheet over Joe, handed Monkey Boy a banana and we set off across the pasture. Our first stop was the home of a kindly woman whose house smelled like mothballs.

He shouted under the sheet, “I ain’t a ghost! I’m a mattress!”

She gave us three pieces of fudge. We knocked on two more doors. Nobody answered.

Back home, Joe said the fudge tasted like mothballs. I agreed. We gave it to Monkey Boy. He ate it all. Then he threw up.

I tossed my crown in the trash and forgot Halloween, until my three children came along.

He wanted to be a “really scary” Red Monster like the one he saw on “Sesame Street.”

So we bought red fur, black felt and a bottle of glue and made a Red Monster suit. Sort of. It was more funny than scary, but he loved it. So did I.

I put a tin-foil crown on his sister, a true princess. A pair of long ears turned their baby brother into a baby kangaroo.

And me? For the first time in my life, I knew who I was and what I wanted to be. So I pulled on jeans and a T-shirt, put my hair in a ponytail and we went trick-or-treating — the monster, the princess, the baby ’roo, and me in my “mom” costume.

I wish you could’ve seen us.

It was the first of many happy Halloweens. Then the kids grew up and did other things on Halloween that I was probably better off not knowing about.

Now my husband and I live in a retirement community in Las Vegas, where if somebody trick-or-treats at your door, they’re probably senile and lost.

We have five grandchildren in California. Randy, Wiley and Eleanor will be skeletons. Henry will be a pirate. Charlotte will be a mermaid. Their mothers, God bless them, will send photos.

I like photos a lot more than candy. But this Halloween I’ll treat myself to something even better. I’ll fly to California and surprise my grandchildren by trick-or-treating at their door.

I know who I am and what I want to be. I’ll throw a sheet over my head and when they open the door, I’ll yell, “Trick or treat!” Then I’ll make them guess what my costume is.

Then I’ll yank off the sheet, do a little happy dance and shout really loud, “I’m your nana!”

I just hope they won’t end up years from now needing to talk about it in therapy.

Kannapolis, Concord share solid relationship I am writing to comment on the excellent level of cooperation between the Cities of... read more