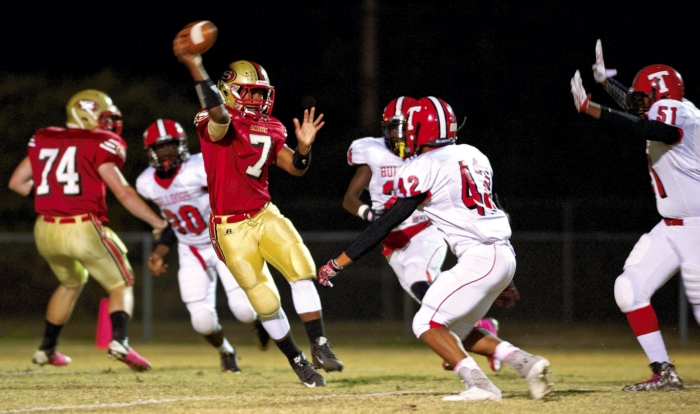 SALISBURY —  Despite numerous golden opportunities Friday night, the Salisbury High Hornets continued their mystifying trend of not being able to put points on the scoreboard.

The Thomasville Bulldogs made two first half touchdowns stand up as they held off a number of Salisbury threats in the second half to win 14-6, their fifth victory in a row and third in the Central Carolina’s Conference. Thomasville (6-3, 3-0 CCC) got a first quarter score from fullback Josh Scott followed by a second quarter touchdown pass from Jalen Jenkins to Cirl Byrd, giving them all the points they would need for the game.

Salisbury (2-7, 0-3) managed one nice drive in the third period but a pair of deep threats, inside the 30, in the final quarter were stuffed by the Thomasville defense.

“One thing I think we do on defense, we do pursue well,” said Thomasville head coach Gil Maxwell. “We are quick and we use our speed. That showed tonight. They (Salisbury) had a couple of chances to get back in it but our defense came through.” His defensive unit sacked the Hornet quarterbacks five times, stopped Hornet runners for losses five times and came up with a key fumble recovery in the fourth period with the game on the line.

In three conference setbacks this season, the Hornets have lost 14-7, 17-14 and now 14-6.  Each followed a similar pattern of wasted chances and frustrating finishes.

“We are still in there and have a chance to make the playoffs,” senior defender Darius Jackson said of the team’s remaining two league games. “We have got to focus and just keep believing. The season is not over, especially for us seniors.”

It was Jackson who made the biggest defensive play of the night for the Hornets midway in the second quarter. Salisbury had driven all the way to the Bulldog 10 thanks to a 33-yard pass from DJ Alexander to Will Steinman. But four runs netted just a single yard and Thomasville took over on downs at the 10. Salisbury’s defense held as well and forced a punt with 6:25 left. Jackson broke through the line and got a hand on Kailon Bratton’s punt, giving Salisbury the ball at the Bulldog 26.

“I was just trying to put our offense in a good position,” Jackson said. “If I had had an opportunity to pick it up and run, I would have but it didn’t come to me. But it was a big play for us.”

The big chance turned to disaster just two plays later when Alexander scrambled out of the pocket only to have the ball knocked out of his hand by the Bulldog pursuit. Thomasville’s Malcolm Beamon pounced on the loose ball at the 26 to end the last hope for the Hornets. Bulldog running back DJ Spann, who was a true workhorse with 101 yards on 25 carries, ran the ball five times to get the clock under a minute and secure the win.

Thomasville opened the game with a nice drive to go up 7-0 thanks to a 27-yard scramble by Jenkins and Spann’s 17-yard sprint. Scott covered the final 10 yards for the touchdown. In the second quarter, the Bulldogs matched it 89 yards to go up 14-0 as Jenkins found a leaping Byrd in the corner of the end zone. A 43-yard catch and run by Tyquan Anderson was the big play in the drive.

Salisbury’s biggest offensive bright spot came late in the third period after the Hornet defense had stuffed a Thomasville drive at the 10 on downs. Operating from the shotgun, Alexander broke off runs of 26 and 20 yards, then halfback Antwond Glenn sprinted 20 more yards. Marcus Corry, who started the game at quarterback, scored the 10-yard touchdown on a handoff from Alexander to get Salisbury on the board. But the extra point was botched due to a high snap to keep the score at 14-6.

The Hornets try to grab a win next Friday at home against West Davidson while Thomasville will host CCC co-leader North Rowan.

College Football: Catawba right where it wants to be