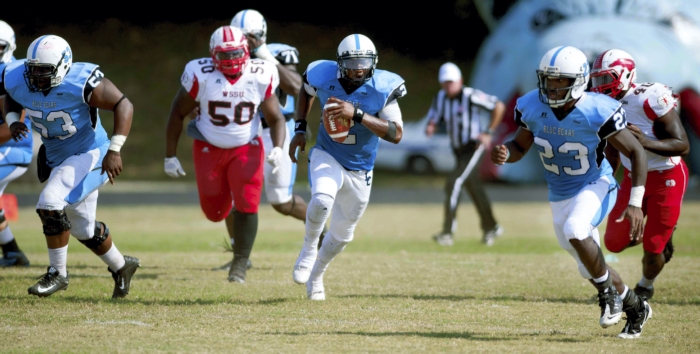 SALISBURY — They say football teams are a “band of brothers,” and that was very evident Saturday afternoon, following Livingstone’s heart-breaking, 23-21 loss to Winston-Salem State.

To a man, the Blue Bears had senior kicker Leo Manzo’s back.

As a strong contingent of WSSU fans erupted in the Alumni Memorial Stadium visitor’s bleachers, the air went out of the home side, as did, most likely, Livingstone’s hopes of playing in the CIAA Championship game on Nov. 14 in Durham.

The Rams are now 3-0 in the division while the Blue Bears are 2-1. With the tie-breaker now in hand, WSSU would have to lose its final two games to swing things back to Livingstone’s advantage — if the Blue Bears won their final two games. The Rams play winless Shaw in Winston-Salem next week.

The loss certainly wasn’t all on Manzo. The Livingstone offense couldn’t get out of its own way in the first half and the defense allowed 528 total yards to the Rams. Still, the Blue Bears had a chance at the end.

Livingstone’s final drive began at its own 25-yard line and basically took the game’s last 6:26. It was a 17-play marathon that covered 60 yards and picked up four first downs. But the final eight plays were all runs, setting up the field goal attempt, as coach Daryl Williams chose not to take a shot at the end zone with senior quarterback Drew Powell throwing the ball.

“I’m not going to second-guess myself,” said Williams. “Leo said he could make it and I’d do it again that way. I believe in Leo, I believe that he’s one of the best kickers in the league and if we get another shot next week, I’d do the same thing.

“We didn’t really need any throws during the last drive,” continued Williams. “We just wanted to get into field goal range and get the ball lined up and use the clock to our advantage. I didn’t believe it was necessary to take chances with the ball when all we needed was a field goal.”

Manzo, who booted a career-best 54-yarder two weeks ago at St. Augustine’s, kicked a 25-yard field goal as time expired last season, beating Bowie State, 36-33, at Alumni Stadium.  Two weeks later, his extra point was the winning margin in a 21-20 victory over Shaw. So Manzo had been in the position before.

“The officials said it was no good,” said Williams. “From my vantage point, it looked good … it was that close. But it doesn’t take away from the fact that our team played an excellent game.”

“It just felt like it was our game to win, that it was in our hands,” said Bowden. “But Leo is still our guy. Any other time, we’re still going to Leo in that situation.”

Powell, who passed for 217 yards during the game, scored a touchdown and threw for two others. He seemingly had Livingstone poised for the victory with several strong second-half drives. He picked up several first downs himself, running out of the shotgun, around the ends, up the middle, wherever he needed to go.

Powell was sweat-drenched and emotional after the loss.

“This is tough, man, to be so close,” said Powell. “For them (WSSU) to be the champions for the last few years and for us to be that close to having a chance to represent the division in the CIAA title game … for it to end like that is tough. But we’ve got to man up, move on and get ready for the next game.”

The Rams rushed at will during the first half and built a 13-0 lead before Powell led the Blue Bears on a 12-play drive just before intermission. The drive saver was a 3rd-and-10 pass to Will Tatum for 20 yards, setting the Blue Bears up at the Rams’ 25.

Livingstone overcame a sack and a penalty but six plays later, Powell went the final two yards for a TD, just 39 second before halftime.

When WSSU took the second half kickoff and drove 92 yards in 13 plays, mainly on the ground, it was beginning to look like it may not be Livingstone’s day. Quarterback Rod Tinsley connected with wide receiver Marcel Caver from nine yards out for the score and suddenly, it was 20-7.

But Powell and LC wasted no time in beginning the comeback.

On Livingstone’s fifth offensive play of the second half, from its own 38-yard line, Powell drilled a strike over the middle to Bowden, who grabbed the pass at the Rams’ 40 and went the distance untouched.

“The defense was focusing on Jalen (Hendricks) and that just opened the middle up and I was sitting there wide open,” said Bowden. “I just had to catch it and I was just hoping nobody got my ankle and tripped me up because I was looking for the end zone.”

Bowden’s score and Manzo’s PAT made it 20-14 and there was new life in the stadium. Now, the LC defense was fired up and the next two WSSU possessions were close to three-and-outs.

At the beginning of the final period, Powell marched the Blue Bears 75 yards in 13 plays to take the lead, 21-20. The drive took just 4:17 as back-to-back pass plays to Bowden and Hendricks netted 36 yards, setting the Blue Bears up at the WSSU 10-yard line.

Two plays later, Powell hit Hendricks with a quick out to the left and he sprinted into the end zone. Manzo’s point after kick put Livingstone ahead with 11:19 left in the game.

Now pressed to come back themselves, Tinsley led the Rams down the field with consistent gains and one big chunk play. On second down at his own 33-yard line, Tinsley connected with wide out Rashan Williams for 35 yards, a leaping catch over two stunned defenders at the LC 32.

WSSU picked up 18 more yards before setting up for its own field goal attempt. Will Johnson missed the 30-yard try, but a running into the kicker penalty on Livingstone gave him another chance. Johnson made the kick from 25 yards, with 6:46 left.

That set the stage for the Blue Bears’ final drive and failed field goal attempt.

In all, WSSU outgained Livingstone, 528 yards to 341. But the Blue Bears were right there in the closing seconds.

“I’m proud to be their coach,” said Williams. “The guys were down 13 points and didn’t give up. They came back to take the lead in the fourth quarter. My hat’s off to them. We’re bruised up and our feelings are hurt a little bit, but now it’s about how are we going to respond?  We just need to go back to work, make some corrections and be ready for next week.”

Notes: Linebacker Marcus Nolan led Livingstone with 12 tackles while Jarod Richardson and Danny Robinson had eight stops each. Robinson forced a fumble and Kevin Williams recovered it, the only turnover in the game … linebacker Kyrell Williamson (A.L. Brown) made six tackles for WSSU … return man Daveon Perry returned two punts and one kickoff for the Rams, totaling 26 yards.