Consultants give Granite Quarry vision for its real opportunities 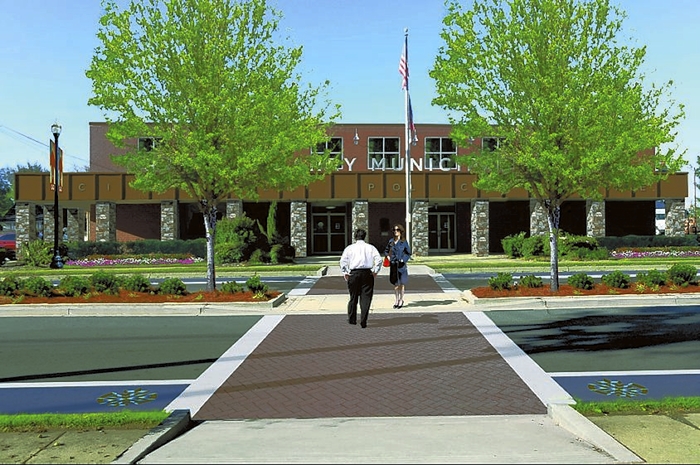 A visualization of how Granite Quarry's muncipal building and U.S. 52 in front of it could be transformed. Stamped concrete crosswalks, a Carolina Thread Trail bike lane and a planted highway median would be part of the street changes.

The visiting planners said the town cannot support a large, standard grocery store, the kind it used to have before Winn-Dixie left about 10 years ago. But the market demand would support a smaller format grocer — the kind of 17,000- to 18,000-square-foot store offered by chains such as Aldi or Piggly Wiggly.

“It certainly would take a conversation” with those kinds of companies, planner Aaron Arnett of Arnett Muldrow & Associates of Greenville, S.C., said. He noted that Piggly Wiggly, for example, has no stores right now in this market area.

Companies such as Fresh Market and Publix sometimes offer smaller format stores, but they usually go in downtown urban areas of bigger cities.

But Arnett said the town might have two other opportunities to explore in filling its big wish for a grocer. He recommended looking at existing businesses such as Patterson Farms, which already offers a produce market at the Brinkley Center.

Maybe the town could offer incentives for Patterson Farms to expand and become a small format store, Arnett suggested.

Another option could be the kind of community co-op stores that have been established in cities such as Burlington and Hendersonville.

As a conclusion to their three-day visit and design charrette this past week, the consulting team presented town officials and the public at large with results of a community survey, insights from a market analysis, a rundown of possible business opportunities in Granite Quarry, an overall design plan for  a core area along U.S. 52 and examples of how buildings and U.S. 52 could be transformed to give the town more of a sense of place.

• To understand the market to create opportunities and investment.

• To build a unique character and strong sense of place.

• To improve the physical environment of the town’s core.

• To focus on improvements to specific properties and buildings.

• To create a connected community by growing the existing pedestrian and trail amenities in town.

• To develop strategic partnerships with outside resources for economic development and marketing initiatives.

Coker said the next steps for the consultants include coming up with a final plan document, recommendations and holding an implementation workshop.

Some of the general things the final plan will suggest is pursuing the desired businesses proposed in the market analysis, going after grants, creating a business recruitment team, focusing efforts on the town’s core, exploring designation as a Small Town Main Street program, embracing the town’s “granite character” and exploring new events to generate visitors and spending.

“This is a long-term goal,” Mayor Bill Feather said of all the things he saw Thursday night. “… We need to plan it right and do it right.”

Paul Fisher of F&M Bank, which is headquartered in Granite Quarry, described the outline seen Thursday night as “really fantastic,” giving the town an idea  of what the future can hold.

Fisher said he hoped it could be a 10-year overnight success story.

Back on real business opportunities Granite Quarry should investigate, Arnett said the market analysis showed $35 million in retail sales leakage in the area of building materials and hardware. That kind of business going elsewhere suggests the town could support an 11,000-square-foot store, which is about the exact footprint of an Ace Hardware or Tru Value store.

Full-service and quick-serve dining are other areas of great opportunity, Arnett said, adding there also is a demand for alcohol sales tied in with dining.

The planners determined that a core area to be addressed along U.S. 52 would extend roughly from Church to Lyerly streets.

Kalback said from what the planners heard and observed this week U.S. 52 has traffic, speed and safety issues. In this core area, there’s also a need for new businesses, walkability, streetscape improvements and architectural and facade enhancements to buildings.

In creating a design plan, Kalback and Wilson said it was important to create a sense of place, connect the town’s parks to existing assets, finding infill and redevelopment opportunities, establish gateways and new signs and make facade improvements to existing buildings.

One of the key areas for redevelopment has to be the 3-acre site that includes the former home of the Eastside store, according to the planners. They also suggested thinking about a residential development whose homes could front along Centennial Park.

The planners described and showed examples of how U.S. 52 could be transformed by medians where a center turn lane now exists, stamped crosswalks, planters, street trees, banners, signs, expanded sidewalks, bike lanes and exterior makeovers to buildings such as Town Hall, McKinney’s mini-warehouses, the Hot Dog Shack, Brown Supply and the Brinkley Center.

The planners’ presentation is being placed on YouTube for residents to absorb.