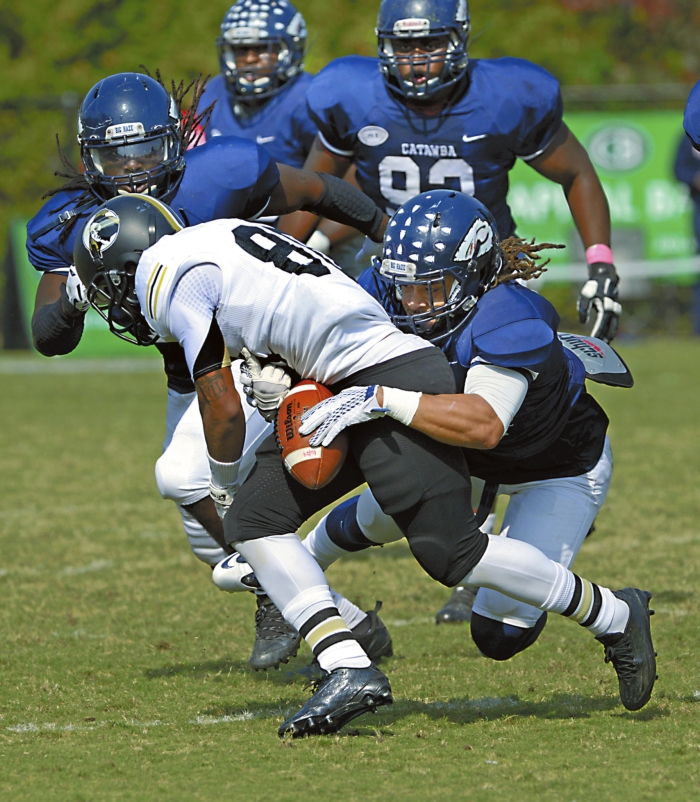 Wayne Hinshaw/for the Salisbury Post ... Chris Carpenter makes a tackle, forcing a fumble from Jonathan Allen (80). Carpenter’s play was a key one early in the contest when the Braves led, 7-0.

SALISBURY — Catawba receiver Bruce Smith was named homecoming king while softball star Gina Gerone was crowned homecoming queen.
They may have been the only two people at Shuford Stadium who had a better day than Catawba head football coach Curtis Walker. Walker not only watched his surging squad take its fourth win in a row, Catawba also managed the rare feat of moving into sole possession of first place in the league standings while playing a non-conference game.
For the Indians, it was a perfect storm on a sun-splashed Saturday. They handled UNC Pembroke, 39-21, while Lenoir-Rhyne was being upset by Mars Hill and Wingate was falling in overtime to Carson-Newman.
When the smoke cleared, Catawba (6-2, 3-1) was the only South Atlantic Conference team with only one league loss. Carson-Newman, Wingate, Lenoir-Rhyne, Mars Hill and Tusculum have two apiece.
“First place does feel good,” Walker said. “It’s nice to be on top of the heap. Everyone will want to knock us off, but the top of the heap is where we want to be and we’ll enjoy being the target.”
Catawba had its best offensive day of the season, piling up 451 yards, including 318 rushing yards.
“The story was our offensive line,” said Catawba quarterback Mike Sheehan, who had 101 rushing yards and was 14-for-19 passing for 133 yards. “Our o-line hit them in the mouth today. We were winning on first down, and when it’s second-and-short all day, it’s pretty easy for the offense.”
Catawba was 8-for-13 on third-down conversions, an unusually high percentage. Catawba was also 5-for-5 as far as finishing drives in the red zone. There were four touchdowns, plus a late field goal by Chad Hollandsworth.
David Burgess rushed 20 times for 149 yards. Cary Littlejohn chipped in with 71 yards on 15 carries.
“That happened because our offensive line really performed and was creating a new line of scrimmage every play,” Burgess said. “Our receivers were blocking well too, so all I had to do was see the hole and hit it. This was big for us. This was a big leap for this team with the offensive line controlling a game like that.”
Walker has been waiting patiently for a leap forward by the offense and never lost faith it would happen eventually.
“We played three straight games in bad field conditions, but I wasn’t that worried,” Walker said. “In dry conditions, we’re able to open up our offense and we were able to complete passes today. That helped out our running game.”
UNC Pembroke’s passing combination of Patrick O’Brien (396 passing yards) and B.J. Bunn (12 catches, 219 receiving yards) produced anxious moments for the Indians early.
Bunn, who broke school records for receptions and receiving yards, and O’Brien both played for coach Hal Capps (Bunn at Western Alamance and O’Brien at Mooresville) and as Bunn explained it, “they have a special connection.”
“Their quarterback gets the ball out of his hands quickly,” Walker said. “And No. 7 (Bunn) was better than we realized.”
O’Brien’s 40-yard pass to Bunn gave UNC Pembroke a 7-0 lead early.
Then Littlejohn lost a fumble at the Catawba 43.
But then Catawba’s defense made its biggest play. Safety Chris Carpenter made a tough hit on a running play, and C.J. Barksdale pounced on the resulting fumble. That was the turning point.
After that fumble recovery, Catawba reeled off the next 29 points.
“They took the momentum,” Bunn said. “We couldn’t get it back.”
Sheehan’s 3-yard scoring run put Catawba on the board. Sheehan’s 7-yard TD pass to a wide-open Carlos Tarrats made it 13-7, and Sheehan ran for a surprise 2-point conversion that made it 15-7.
A 6-yard scoring run by Littlejohn finished a 73-yard drive and sent Catawba to halftime ahead 22-7.
Then it was 29-7 after Sheehan scored on a 22-yard sprint, dashing away from the UNC Pembroke defense after getting a shielding block from guard Tim Pangburn. Sheehan’s run capped a textbook 75-yard drive, the sort of march the Indians weren’t making a few weeks ago.
“Awesome feeling,” center Tim Buck said. “Like we finally clicked.”
Catawba’s defense had its hands full with O’Brien and Bunn, but interceptions by Case Woodard and Carpenter helped.
“Catawba’s got a lot of good players on defense,” said UNC Pembroke offensive lineman Charles Holloway, who starred at West Rowan. “We haven’t played against a lot of odd fronts like they use, and 45 (Kyle Kitchens), 50 (Jamal Lackey) and 93 (Jonathan Jean) were tough. We showed up today, but it seemed like Catawba wanted it even more than we did.”
DaiQuan Lawrence broke up three passes for the Indians. Kitchens, an outside linebacker, had three of the Indians’ five sacks. Barksdale and Hunter Lee notched one apiece.
“They had trouble blocking Kitchens,” Walker said. “He made them change some things, but they found other things to go to.”
When Burgess scored on a 9-yard run to finish off a grinding march that lasted nearly seven minutes, Catawba led 36-14 with 6:35 remaining, and victory was no longer in doubt.
“We were able to take our time — and move the ball on the ground,” Sheehan said. “It was nice to be able to run the ball and close them out.”
Catawba’s defense hasn’t allowed more than 21 points in its last seven games. UNC Pembroke reached 21, but the Indians won special teams and their offense was efficient in front of 3,552 fans.
“We’ve depended on our defense so much this year,” Burgess said. “They did their thing again, but it felt good that they could lean on the offense a little.”
Catawba plays at Brevard next Saturday at 1 p.m.