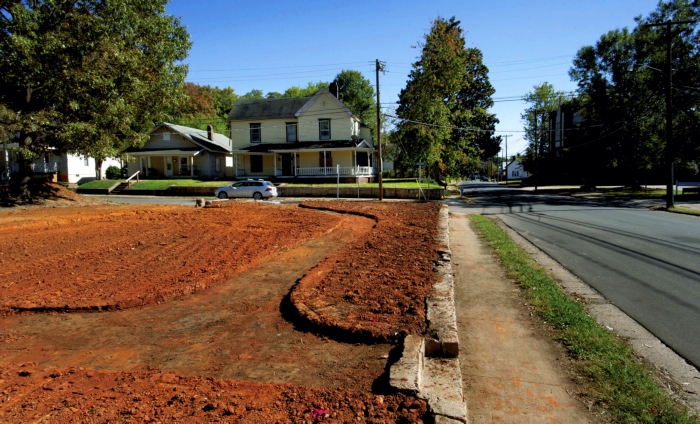 The pathways are carved out in a new community park at the corner of South Jackson and Harrison streets. The small park is one of the many projects that will be worked on by volunteers this weekend during the fifth BlockWork Neighborhood Improvement Project. Jon C. Lakey/Salisbury Post

SALISBURY — The Community Appearance Commission and Housing Advocacy Commission will hold its fifth BlockWork Neighborhood Improvement Project Saturday in the 800 and 900 blocks of South Jackson Street.

The day’s work in this Chestnut Hill neighborhood lasts from 8:30 a.m.-5 p.m. Lunch is provided to the volunteers

Senior Planner Lynn Raker said crews will be working on at least 20 separate properties in the two-block area, including the corner of Harrison and Jackson streets, where a new pocket park is planned.

Grading already has occurred on that corner lot, which will have a couple of walkways, a picket fence and plantings.

A home was razed on the site, and the owner donated the land.

Preparatory and preliminary work elsewhere on the two blocks has included the removal of trees, repairs to stone walls and some grading. Medina Construction once again has donated its time and materials toward reroofing one of the houses.

The Chestnut Hill Neighborhood Association has gained nonprofit status. The congregations of four churches, residents of Chestnut Hill, Historic Salisbury Foundation and the Salisbury Community Development Corp. have been making concerted efforts in revitalizing the neighborhood over the past two years.

This will probably be the largest BlockWork project to date with about 200 volunteers involved in the all-day work Saturday.

“This is the most volunteers we’ve ever had,” said Barbara Perry, head of the Housing Advocacy Commission. “… This particular project has moved both Lynn and me.”

Crews and crew chiefs are assigned for each project and property being addressed.