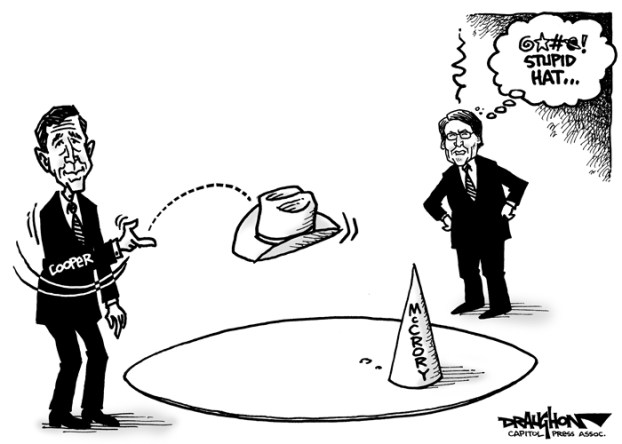 RALEIGH – When Attorney General Roy Cooper officially announced his bid for governor in 2016 last week, he didn’t steal the show at the event in his honor in Rocky Mount.

His three grown daughters did. And if that wasn’t by design, it should have been.

Hilary, Natalie and Claire warmed up the crowd before Cooper’s announcement, sharing anecdotes about their father, who approached the stage with his wife, Kristin.

One daughter called him the “kind, honest family man” who sits in the front row at her plays in community theater. Another said Cooper coached her basketball team and taught her to be a strong woman “who plays to win.”

On the “Meet Roy” section of Cooper’s campaign website, the seventh and eighth words are “family man.” At the top of the page is a large photograph of the smiling Cooper family.

“He’s the kind of common sense leader families can trust,” his biography states.

You’ll be hearing a lot of that between now and next November.

This is one way that Cooper, a Democrat, can distinguish himself from Gov. Pat McCrory, who is married but has no children. McCrory’s wife, Ann, has largely stayed out of the political spotlight.

Cooper, the four-term attorney general, didn’t surprise many people with his announcement or with anything he said at the event. He talked in broad terms, mainly about making education a priority and making the economy work for everyday residents across the state. He continued the family theme that his daughters had started before he took the stage.

“It’s time for a governor who believes that we should measure our state by the success of regular working folks,” Cooper told supporters.

McCrory has the power and perks that come with incumbency, along with experience in the Executive Mansion. No governor in N.C. history has lost a re-election bid.

On the same day Cooper made his candidacy official, McCrory announced that N.C. motorists could renew driver’s licenses online, as well as other changes designed to make DMV offices easier to navigate.

Also, as governor, McCrory is in a unique position to tout his support for family-friendly initiatives. Recently, the governor’s office sent out a news release recognizing October as “Domestic Violence Awareness Month.”

“Ann and I believe that if all of us work together, we can end the cycle of domestic violence affecting North Carolina families and children,” McCrory said.

And just this week, McCrory held an event at the mansion to sign legislation to add a test for severe combined immunodeficiency (SCID) and similar diseases to the newborn screening panel in North Carolina. The measure was named after Carlie Nugent, a baby who died of SCID.

“Carlie left us far too early, but her life has inspired action to help other families across North Carolina,” McCrory said. “Every family should be able to screen and treat SCID as soon as possible, and the Baby Carlie Nugent Bill will help families do just that.”

Did you count those references to families?

So the 2016 governor’s race is off and running. Cooper is pushing the “family” narrative early on, but McCrory will do what he can to battle back – or change the plot.

First day of early voting kicks off with 140 ballots cast