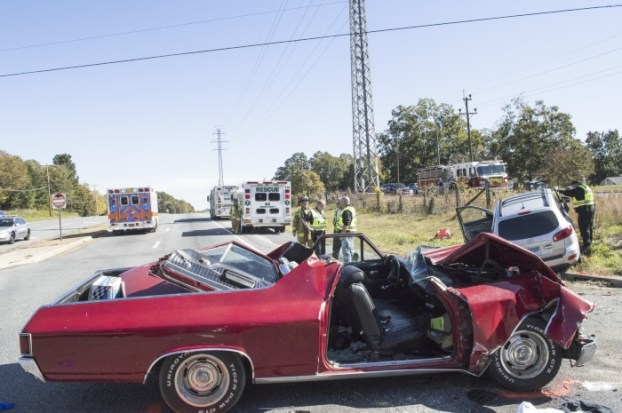 A crushed 1971 El Camino sits at the intersection of U.S. 29 and Liberty Street in China Grove. It was on of two vehicles involved in a traffic accident on Thursday. Two children were among four people involved in the accident. The children were traveling with a woman in a silver Hyundai. Josh Bergeron/Salisbury Post

CHINA GROVE — Four people were hospitalized Thursday when two cars collided near the intersection of U.S. 29 and East Liberty Street.

Among the four were two children — a 1-year-old and a 3-year-old. The children received facial injuries, according to China Grove Police Chief Eddie Kluttz. Drivers of both vehicles also received injuries. All four were transported to Carolinas HealthCare System Northeast in Concord, according to Kluttz.

A silver Hyundai — with three occupants — was traveling across U.S. 29 when a red, 1971 El Camino struck the side of the Hyundai. The El Camino was traveling northbound on U.S. Highway 29.

Krishna Helle, who has a Salisbury address, and the two children were in the Hyundai. The Hyundai had a Connecticut license plate.

Donnie Frye, who also has a Salisbury address, was the only person in the El Camino. Frye was pinned in his vehicle and received neck injuries, Kluttz said.

Neither driver was immediately cited for traffic violations.

China Grove Police Officer Steven Wood said a crash reconstruction would reveal further details about exact cause of the accident.

Editor’s note: this article has been updated to correct the direction vehicles were traveling.