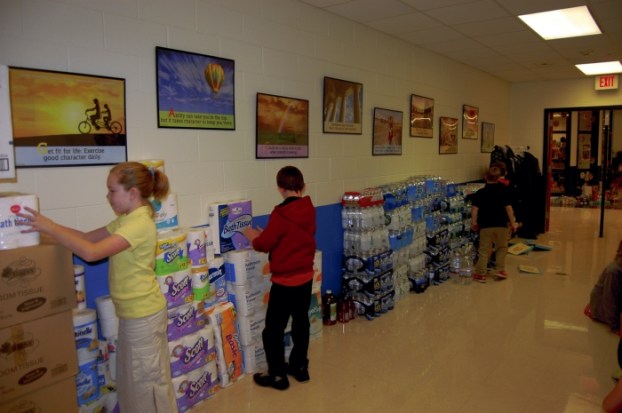 Shive Elementary School's student council decided to collect items to donate to the South Carolina flood victims.The students gathered and sorted all of the items in the school's hallways. Amanda Raymond/Salisbury Post

The schools in the Rowan-Salisbury system have not forgotten about the South Carolina flood victims.

The Shive Elementary Student Council chose to dedicate this year’s service project to the flood victims of Columbia, S.C.

“They didn’t want to take up money. They wanted to bring stuff that they knew (victims) could use,” Bondurant said.

The residents of South Carolina are still recovering from the heavy rainfalls that caused significant flooding earlier this month.

Columbia, South Carolina’s capital, recorded a new 24-hour rainfall record, with 7.77 inches of rain in one 24-hour period, according to the Weather Channel’s website.

The students worked with the Saleeby-Fisher YMCA to develop a list of items they could collect for the flood victims. They started collecting items on Oct. 12.

Some of the items they collected were water bottles, diapers, paper towels, non-perishable food and blankets.

The student council members have been encouraging their classmates to donate what they can to the cause.

“One little girl, she was so funny. She was a fifth-grader in a second-grade class and she says, ‘I don’t know if you know it but there’s a flood in South Carolina and we’ve got to help them,’” Bondurant said.

“I think it’s good because they had to go and talk in front of people,” Bondurant said, mentioning some students having to do things like write letters to officers and talk to their dentists about giving.

“My mom even told me that if enjoyment and excitement were like a grade for this, then I would probably get over 100,” she said.

The students have been gathering all of the donated items and sorting them in the school’s hallways.

Bondurant said she has been telling the students that every little bit counts.

“It doesn’t matter how big or how small, it’s going to help somebody,” Bondurant said.

Other schools are also participating in the collection.

Collection for the flood victims will end today. Cheerwine has donated a truck and a driver to deliver the items to Columbia. Bondurant said the driver will be delivering the items on either Sunday or Monday.

Student council members said they were glad they were able to send help to people who really needed it.

“It makes me happy that we’re doing something good for people who don’t have what we have,” Kaylee Walker, student council member, said.

Bondurant said learning to donate to the community is a good lesson for students to learn.

“Schools are all about teaching and math, reading, those kinds of things,” Bondurant said. “But I think giving back to the community is important also.”

Growing up with two brothers — Will, who is my twin, and my younger brother, Joe — hasn’t always been... read more