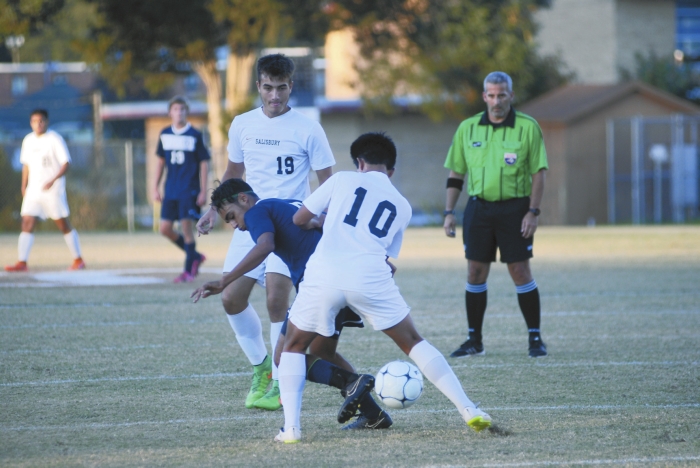 It was a tight, evenly-matched tussle between two perennial state 2A playoff teams. Afterwards, both coaches seemed thrilled with the competition, regardless of the final score.

Coach Matt Parrish’s Hornets remained unbeaten and improved their overall record to 18-0-2. CATA, coached by Catawba College graduate Jay Niessner, falls to 12-7-4, but the loss was the Cougars’ first to a 2A school, after losses to bigger schools like Weddington, Providence and Marvin Ridge.

“When I built the schedule, we had some tough games at the beginning and we threw this game in late because CATA is a perennial power,” said Parrish. “They are very well-coached and a very good squad, so I wanted us to have the opportunity to have a very tight match right before the playoffs start (Nov. 3).”

Niessner agreed with Parrish on that strategy.

“It was a heart-breaker, but what a good game,” said Niessner, who was not at all dejected by the loss. “That the reason we scheduled the game with Salisbury. Matt and I have been doing this for a couple of years now because it’s good to get two 2A teams together, to get ready for the playoffs.

“It’s good to get a contest like this with only one week left in the regular season,” continued Niessner. “We might turn around and see them in two weeks. They’ve got a real solid team and we’ve got a good team too … just a good game between two good teams.”

With overtime looming, Uribe took a throw-in from Josh Lynch, barely got his head on it and it ping-ponged off two CATA defenders and casually rolled into the goal. CATA goalkeeper Jahmai Thomas was caught leaning to his right as the deflection went to his left. Off-balance, he couldn’t scramble back in time to prevent the goal with just 31 seconds remaining.

“I saw the throw-in coming in short, so I dove in and it barely skimmed the top of my head,” said Uribe. “It deflected off of two defenders and it just got inside the post. But a goal’s a goal.”

The Cougars had just tied the game with 4:30 left in the game, on a rebound volley in close from Roberto Fleming. Salisbury goalkeeper Arturo Ramirez had stopped the initial shot off of an indirect kick.

“I knew it was going to be close, I just didn’t know it would be 31 seconds close,” said Parrish. “Christian was in the right place at the right time, but overall, their keeper made many, many good saves. We had some good opportunities that he stopped.”

The first half saw Salisbury come out strong during the first 20 minutes and CATA control things for the next 15, though there were no corner kicks and just a handful of shots. Salisbury scoring ace Landon Goodman had several runs, but the solid Cougar defense seemed to step up most times.

Midway through the first half, Goodman did have a fairly clean shot from the left of the goal from about 10 yards out, but he pushed it right.

With 4:16 left in the half, Salisbury finally earned a corner kick. The kick came in too high for Uribe and Goodman in front of the net, but on one bounce, Kevin Flores drilled a shot past a diving Thomas from 13 yards out. Salisbury led, 1-0.

“I jumped for it but it was too high for me,” said Uribe. “It bounced behind me and Kevin knocked it right in … a very nice ball.”

The second half was a struggle for productive possessions until the dramatic late goals. Flemming did have a point-blank strike from the top of the box with 1:18 left, but it was right at Ramirez and the senior made the save.

“We both took advantage of some chances, but we had a couple we didn’t finish and so did Salisbury,” said Niessner. “It could have been 5-4, just as easily as 2-1.”

“Last year, they beat us, 2-1, at their place and both goals were off set pieces and again tonight it bit us in the behind,” added Parrish. “But we’re going to see them again if we do as well as we hope to do, so it was good to familiarize ourselves with them to better prepare ourselves for the playoffs.”