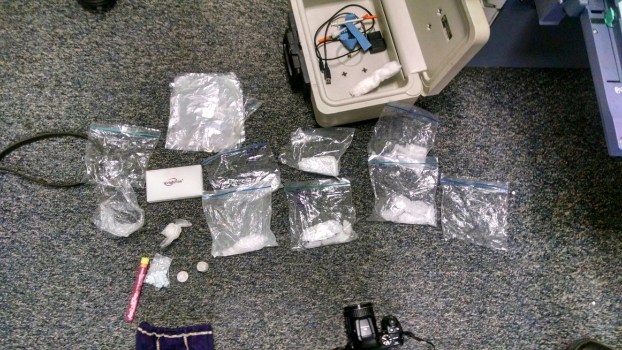 A man was arrested in Rockwell Wednesday, charged with having $30,000 worth of methamphetamine hidden in a safe in his car.

John Clinton Dunbar, 41, of Salisbury, was pulled over at the intersection of Johnson Dairy Road and U.S. Highway 52 in Rockwell in reference to an ongoing domestic and trespassing issue at a residence on Johnson Dairy Road. Deputies report that Dunbar’s white Jeep had a fake tag on it, and that Dunbar was driving with a revoked license.

Dunbar was charged with driving with a revoked license and registration violations. When deputies did an inventory of the Jeep, they found a set of digital scales with supposed drug residue on them, and a K-9 unit detected the presence of narcotics in a safe in the passenger seat. The safe was covered up by a coat. The Sheriff’s Office obtained a search warrant for the safe, and found 301 grams of crystal methamphetamine inside. The street value of the methamphetamine is an estimated $30,000.

According to the report, the safe also contained nine units of oxycodone, two units of morphine, 46 units of diazepam, 12 units of alprazolam, six units of buprenorphine, syringes and plastic bags.

Dunbar has previously been convicted in Rowan County for obtaining property by false pretenses, possessing stolen goods, larceny, assault with intent to kill, inflicting serious injury, and possession with intent to manufacture, sell or deliver.