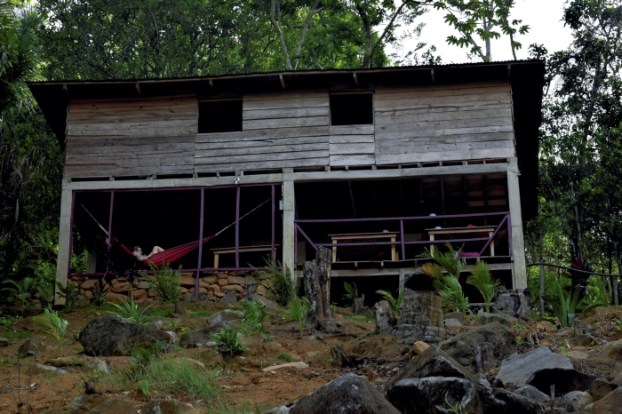 Catawba student searches for sloths in Panama, finds and studies snakes instead When Catawba College student Tabitha Turenchalk of Sheffield Lake, Ohio, left for a summer internship in El Copè, Panama on June 29, she was planning to research sloths. But when a week passed and she failed to locate any of these slow-moving mammals, she switched species, opting to study snakes instead.

Turenchalk, accompanied by fellow Catawba students Joel Schlaudt of Richmond, Va., and Britt Parsons of Durham, went to La Mica Biological Research Station. There she planned to lead Schlaudt and Parsons in efforts to research sloths and their relationship with algae. But, as she explained, “After a week, it was apparent I wasn’t going to find any sloths. Even if I found one or two, it wouldn’t offer enough samples.”

Fortunately, she was offered a chance to work with Dr. Julie M. Ray on a project that she had underway. Ray, the owner of La Mica, has a passion for research in herpetology, the branch of zoology concerned with the study of amphibians and reptiles.

One of the many things Turenchalk learned while working with Ray was how to properly identify snakes morphologically. This identification includes counting the scales to be able to differentiate between species, measure body lengths and compare types of scales.

While Turenchalk would like to “explain more” about her research, she first needs “to secure my data.”

“Dr. Ray and I decided it would be best if we kept quiet until molecular work is finished,” Turenchalk shared, adding, “but (our research findings) will be awesome.”

While in Panama, not only did the three Catawba students get to conduct research, but they also explored the area and experienced a lot of the mountainous Panamanian living. Turenchalk and the other interns stayed in an open wood structure, similar to a treehouse, on Ray’s property. She confirmed that staying in those living quarters was one of her favorite things about being in Panama.

She said she loved waking up every morning to the noises of dozens of chickens, children playing, dogs barking, birds singing and the fishmongers selling fish. The interns also did plenty of hiking, including night hikes, a hike to Las Yayas waterfall, as well as hiking in different parts of the city, all set in mountainous terrain.

Turenchalk described Panama as “being very isolated and simple,” and explained that “the nearest place to shop is 45 minutes away by bus.” Along with all the hiking, she was able to swim for the first time in the Pacific Ocean, which she said was exciting for her.

And while Turenchalk said she had an amazing trip, she encourages her fellow students and faculty to stay tuned for more information on her snake research to be released shortly.